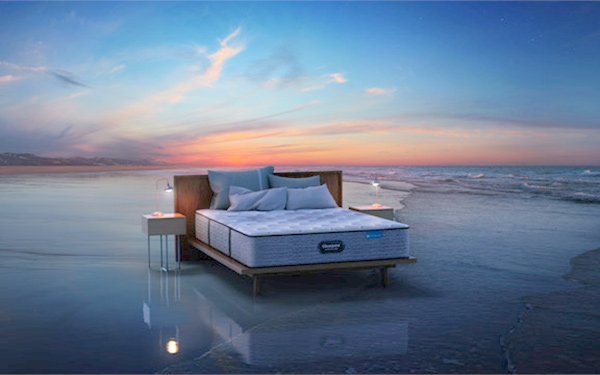 Badger & Winters is introducing its first creative campaign for new client Beautyrest that was developed under COVID-19 challenges.

The TV spot opens with a turtle swimming through an ocean before winding to transform into a mattress while a female voiceover details how each mattress is constructed with sustainable fabrics in partnership with SEAQUAL.

This creative direction was not always the intended pitch. “When Covid19 affected our world, we knew we couldn't do a commercial shoot,” explains Michael Sileck, director of marketing, Beautyrest. “Our number one priority was safety.  We didn't want to put any of our partners or talent at a safety risk.”

Instead, the agency and brand decided to utilize CGI production. Yet even this safer form of filming wasn’t necessarily easy, says Sileck.  “Having to do this virtually challenged each production element, so we needed unprecedented levels of patience and problem-solving,” he says. “However, we have arrived at a place where time and space doesn't matter, where we can create anything with talent, agency and production teams all working together from different geographical locations and different time zones.”

The campaign will launch with a digital-first media buy utilizing new online channels such as programmatic TV and digital audio and will be amplified with OOH executions and influencers. There will also be a partnership with TED Talks on a sleep series which will kick off later on in the summer.

While the overall campaign remains targeted towards Beautyrest’s core audience, the company is also reaching out to a set of consumers that seek premium goods and “status” in a differentiated way such as environmentally-friendly technologies. “Often these consumers also were seeking a more approachable price point, which aligned nicely with Beautyrest Harmony Lux,” says Sileck.

The campaign also punctuate the products eco-friendly nature with fun factoids, like how each queen-sized Harmony Lux mattress contains the equivalent of 50 plastic bottles gathered from the ocean.