The Medium Is The Messaging App 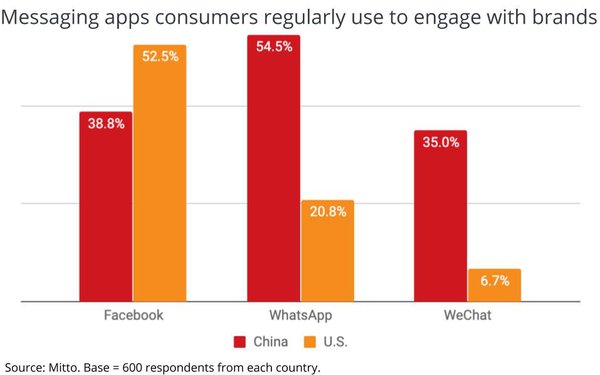 Add A2P to the growing list of important media technology acronyms vital to brand marketers and their agencies. It stands for application-to-person, a catch-all for peer-to-peer messaging apps, but according to a new study from communications technology provider Mitto, it increasingly could stand for advertiser-to-person, too.

The study finds many consumers now regularly engage with brands via such apps, though they vary by market. The study does not go into granular detail about the time-spent share of voice, or other potentially vital stats about the role messaging apps are playing vis a vis the overall media mix, just that some currently are used by brands to reach a majority of consumers, especially Facebook and its WhatsApp unit.

In the U.S., more than half (52.5%) of consumers say they regularly interact with brands via Facebook's messaging app, while a fifth (20.8%) cite WhatsApp.

The shares flip when you look at overseas markets, especially China, where Facebook is still an also-ran. Based on the social media trade war the White House has sparked around Chinese social media apps, including TikTok and WeChat, I wouldn't be surprised to see that flatten out or even erode for both Facebook and WhatsApp.

Conversely, WeChat was just beginning to take hold in the U.S., with nearly 7% of Americans saying they use it to interact with brands. I'm going to guess many of them are either Asian Americans, or other Americans interacting with Chinese brands.

One of the unintended consequences of the White House's digital media war with China will likely be even less trade with those apps, and with Chinese brands.

To be clear, a federal judge recently ruled to block the Commerce Department's ban on WeChat, but the White House is appealing that decision.

In the short term, the political hype and media spin surrounding the maneuvers likely drove even more downloads of WeChat than otherwise might have been the case, as some Americans sought to get on before the window closed.

Longer term, a ban would constrict marketing commerce between Chinese brands and Americans.

While that may be something the White House wants, the unintended consequence will likely mean that many of those Chinese brands also will reduce or cut ad spending to reach American consumers.

That's not inconsequential. According to an analysis by GroupM Business Intelligence chief Brian Wieser, Chinese brands spent as much as $8 billion on Facebook in 2019 to reach American consumers.

How much spending goes the other way by American brands trying to reach and market to Chinese consumers -- via conventional media, or messaging apps -- we may never know, but cutting advertiser-to-person messaging, regardless of the market, cannot be a good thing for mobile marketing.