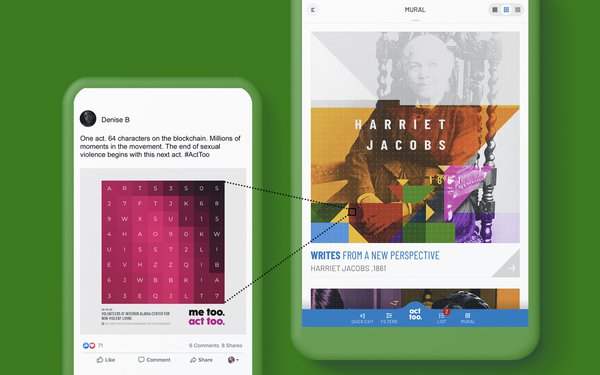 Following the three-year anniversary of the #MeToo movement that inspired victims of sex harassment to tell their stories, IPG agencies, led by FCB/SIX, are uniting with the initiative’s founder Tarana Burke on a new phase that focuses on calls to action such as enacting legal and policy changes.

FCB/SIX has spearheaded the creation of a digital platform and framework for an ongoing campaign to support the movement, with support from sibling companies including Acxiom, Current Global, IPG Mediabrands, ITB Worldwide and UM’s J3.

The work’s centerpiece is a crowd-sourced blockchain-powered platform, representing the first time blockchain has been used to drive activism, according to the agency.

When a user completes an action at the digital hub, they will be given a unique block that gets added to a blockchain-powered indelible record. This action is recorded permanently in a public ledger to let the user know his or her entry “can’t be silenced, altered or erased.”

The interactive platform also features a recommendation engine modeled after ecommerce sites to use intelligence to recommend personalized actions people can take to support the movement.

The portal’s suggestions range from micro-actions, like watching an educational video, to formal actions, such as donating or volunteering.

To further the visual representation of these actions, FCB/SIX is launching a digital monument in which every action transforms into a 64-character block image that will ultimately form a digital tapestry celebrating notable leaders, from Harriet Jacobs to Rosa Parks, in the fight against sexual violence. This mosaic will be shareable on Instagram and other social media and displayed via OOH activations, including one in New York City's Times Square.

In addition, a brand partnership program, featuring launch sponsors such as Levi Strauss & Co., is in place.

“FCB Global has been moved by recent events to apply our industry leadership position to catalyze social change,” stated Carter Murray, FCB Worldwide CEO. “There’s still a tremendous amount of change needed to win the fight against sexual harassment and assault, but we’re emboldened by the progress made and optimistic for lasting impact ahead.”