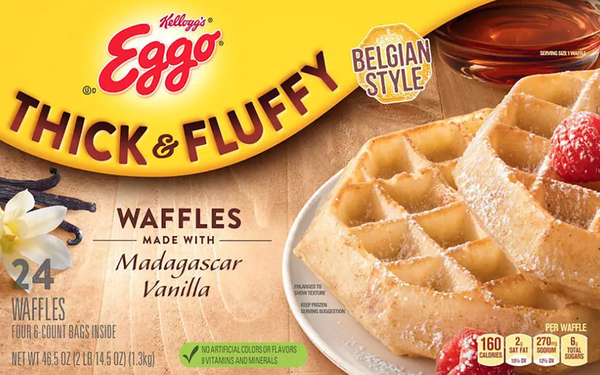 With retail sales in some CPG categories “elevated but decelerating” at this stage of the pandemic, Kellogg and Kraft Heinz are ramping up advertising and marketing spending.

“As expected, at-home consumption growth for packaged foods in general decelerated across the quarter, and our categories were no different,” Kellogg chairman and CEO Steve Cahillane said last week while explaining Q3 financials.

Frozen foods fared particularly well for Kellogg, as they “didn’t decelerate as much as cereal and snacks.”

Kellogg’s Eggo brand had nearly 13% retail sales growth, while MorningStar Farms rose by almost 18%--fueled in part by the quarter’s launch of the meat-alternative Incogmeato line.

During its Q3 presentation, Kraft Heinz didn’t focus on specific brands but instead called attention to the six “consumer platforms” it has developed as a replacement for the category approach to which it had long adhered.

Ever since Kraft and Heinz merged in 2015, the combined entity has been trying to sort itself out in every aspect of its business. Among other things, this prompted so-called SKU rationalization before COVID-19 forced it on the marketplace.

“From the earliest days of Kraft Heinz, we have viewed our business largely through the lens of categories, based on the outdated hierarchy of product types. For example, ketchup, gravy or pasta sauce,” Global Chief Growth Officer Nina Barton said in a September presentation.

“We tried ineffectively to manage more than 55 categories focusing on discrete consumer needs, with siloed goals of winning in certain sub-categories," she noted. “This narrow focus caused us to miss the larger, more holistic consumer needs that would truly shift the business, and our size was working against us instead of our scale working for us.”

During the same presentation, Kraft Heinz U.S. zone president Carlos Abrams-Rivera said the company has “eliminated more than 1,100 existing SKUs, roughly 20%  of our business in a few months.”

Kellogg increased its advertising and promotion spending by double digits in the third quarter and projected the same for Q4.