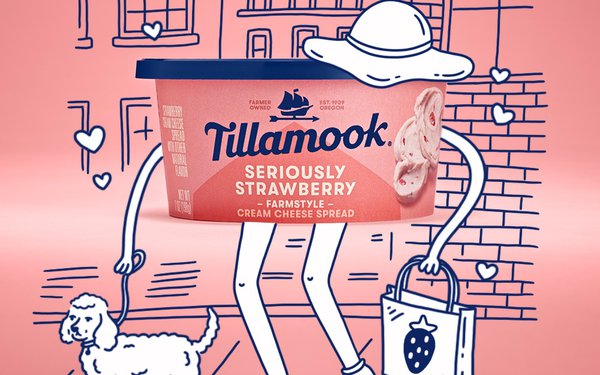 When it comes to cream cheese, breaking up with the “autopilot purchase” is hard to do, according to the 112-year-old Tillamook County Creamery Association.

That’s why the group is rolling out what it says is the country’s first cream cheese “breakup hotline” while introducing people to “eligible” replacements.

“Food overall can be hard to get people to break their autopilot purchases,” Tillamook vice president of marketing Sue Kapllani tells Marketing Daily. “We know that 64% of cream cheese consumers keep on going back to one brand in particular. So let’s have some fun with how we wake them up to other options out there.”

Tillamook is promoting its cream cheese spreads with a digital-only campaign in which the products have their own personality.

This 15-second video from the 72andSunny agency introduces the “seriously strawberry,” “very veggie” and “original” iterations. Meanwhile, “original” takes center stage in this spot, as captions explain “I’m only made with the good stuff. Thank you for attending my spread talk.”

Those who require additional assistance with cream cheese breakups and hookups need only dial 844-SAY-GBYE to interact with the breakup hotline.

When the hotline went live on Thursday, callers could leave a “breakup message” for their old cream cheese brand; hear a pre-recorded message from Iman Hariri-Kia, the sex-and-relationship editor at the publication Bustle; listen to other peoples’ breakup confessions; or meet “the most eligible” cream cheese flavors.

“We’re also actively listening,” says Kapllani.  “We’re hoping they’ll give us responses that help us make our products better and serve their needs better perhaps in ways we don’t currently know. That’s a secondary motivation of the breakup hotline.”

Oregon-based Tillamook is owned by some 80 farming families. The cooperative says it has a household penetration rate for its products of 84.2% in the Pacific Northwest.

“We’re excited once airport traffic gets back to normal that there’s an additional six million potential fans that we’ll reach from all over the U.S. running through there,” says Kapllani.