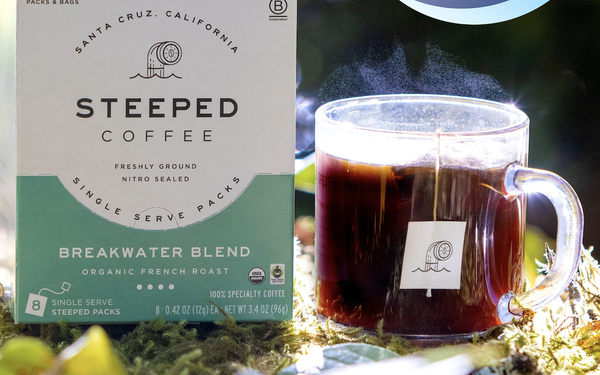 Change is always brewing in the coffee aisle.

CPG FYI has boiled things down to interesting developments categorized by the letter I: innovation, intimidation and integration.

Innovation by Steeped Coffee literally comes in the form of a pod-cast—as in, cast aside plastic coffee pods and simply boil water instead.

At the recent Natural Products Expo East in Philadelphia, Steeped was recognized as the Best New Tea or Coffee. Giving a cold shoulder to the traditional single-serve coffee space, Steeped partners with more than 300 largely regional coffee roasters across the country.

And yes, there’s a sustainability claim: by using bags that typically contain tea, Steeped boasts that it offers the only “fully compostable and freshly brewed coffee method available with no equipment required.” 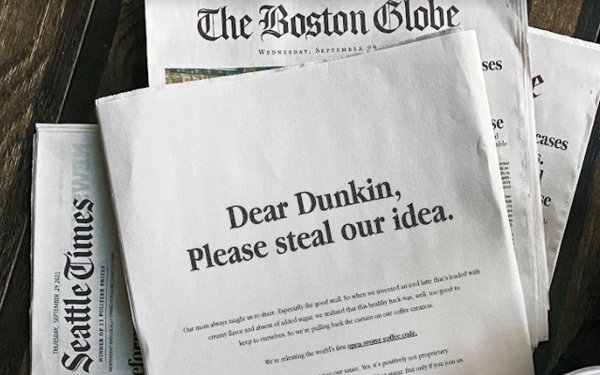 On to intimidation—or more accurately, an attempt to call out two coffee giants.

Citing ‘Dunkin and Starbucks by name, the ads challenged them to “steal” Super Coffee’s ingredient list while chiding them on their sugar content and propensity to keep their ingredients secret.

“It’s like a David & Goliath story about this smaller coffee company literally giving away its formula and going against the grain of privacy,” Super Coffee chief creative officer Chad Portas tells CPG FYI.

It had a B2B aspect as well—one that was not limited to who saw the newspaper ads.

“We’ve gotten a ton of response on LinkedIn, which has been fantastic, as it was never the intent to use LinkedIn as a tool. Our CEO posted the story and it got hundreds of thousands of impressions and comments and shares.” 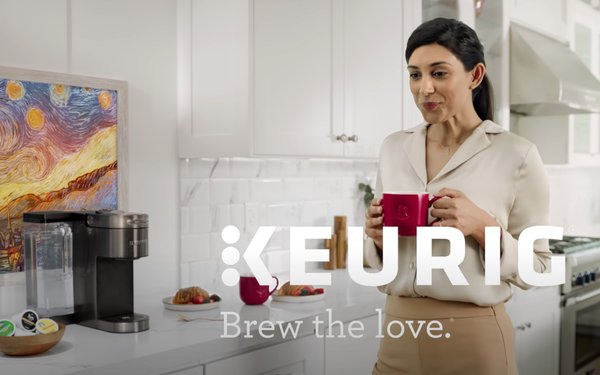 As for integration between product and consumers, in 2017 Keurig created the Connected Consumption Panel to gather data from 10,000 households via the company’s brewers, fitted with internet connectivity and a camera that captures the pod being brewed.

In the following Q&A, edited for brevity and clarity, vice president of Keurig experiences Annie Oh talks about the July launch of the K-Supreme Plus Smart Brewer, equipped with Keurig’s BrewID technology.

Among other attributes, the machine enables the company to more closely integrate with the machine’s users to provide brewing tips and special offers.

CPG FYI: Does the Connected Consumption Panel provide you with more—for lack of a better word, granular—information?

Oh: We don’t have the full landscape with IRI, [a data provider] that only covers about 60% of purchase consumption data. So by getting a broader landscape of where else people are purchasing, you’ll see other variations of data, which is incredibly helpful.

CPG FYI: What’s special about the K-Supreme Plus Smart Brewer?

Oh: With BrewID, once we know what the recognized pod is, we can provide a recommend recipe from a coffee expert. It will vary by variety—the right strength, the right temperature. The strength varies by the flow of the water, and the temperature brings out the right flavor notes.

CPG FYI: What else can it do?

Oh: We also have Smart Auto-Delivery. Once you sign up, we’ll know your average daily consumption and can predict when we think you’ll need to replenish. We’ll send you an email saying it looks like you’re running out, so we’ll send a new delivery of your blueberry coffee.

CPG FYI: Explain how your new app works with the machine.

CPG FYI: When people opt in with the app, what kinds of offers do you send?

Oh: We have an in box in the app as well as push notifications. For example, if we know you’re a hot-cocoa drinker, we have some special recipes that we’ve designed for Halloween that go with hot cocoa. So we’ll send you that recipe as well as a coupon to get dollars off that hot-cocoa purchase.

We also have some things in the works for holidays coming up around particular holidays and promotional offers.