Can Brands Survive Without Advertising? 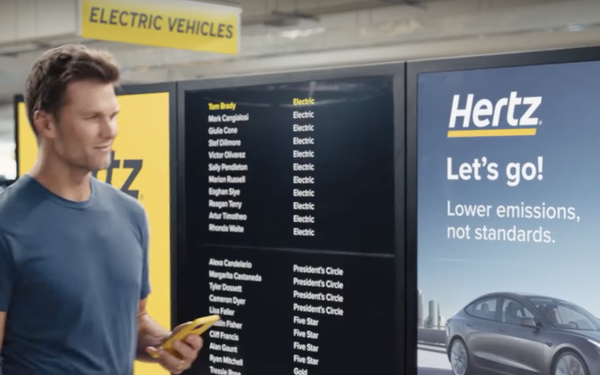 Tesla may not run trad ads, but it did participate in a Hertz promotion, as shown above.

Can a new brand launch without advertising?

As a result, Tesla spends very little on advertising, yet Tesla ranked No. 14 on Interbrand’s Best Global Brands ranking, before Honda, Hyundai and Volkswagen. Zara ranked at No. 45,  ahead of Dior and Burberry. Zoom also made the list, despite very little advertising.

Why did Tesla rank so high? Defenders point to Musk, a public critic of advertising, who likes to think outside the box. For example, last October, Hertz began running ads that promoted the availability of Tesla cars. Part of the draw is that it will get new customers to try out a Tesla. A recent JD Power survey shows that just 7% of people who have never ridden in a Tesla say they plan to buy one, but that number jumps to 20%  for those who have driven in an EV.

Trader Joe’s takes a unique approach to marketing, including relying on a carefully curated product selection and unique packaging, according to The Strategy Story.

As a result of relying so little on advertising, the brands provide some conversational fodder. You may ask a friend “Have you heard of Zara?” and they may or may not have, so you can fill them in, fulfilling marketers' goal of having consumers talk about their brand.

Even the largest advertisers have expressed misgivings about advertising. Marc Pritchard, chief brand officer at Procter and Gamble, was quoted in a New York Times story saying that ads are often irrelevant and sometimes “just silly, ridiculous or stupid.”

In response to this disdain, marketers should consider going the no-advertising route before committing to advertising and then ensure that they’re not wasting the consumer’s time and providing them with useful information -- or at least a good laugh.