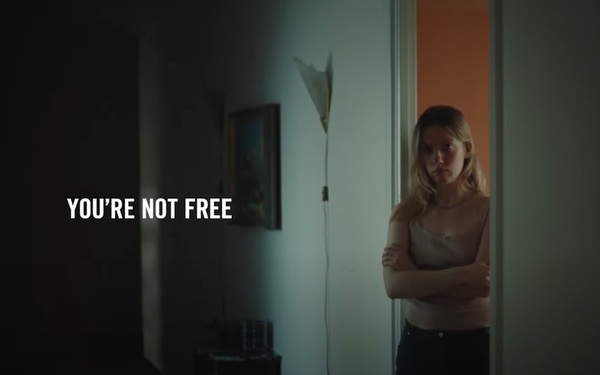 Amnesty International is launching a global campaign challenging the humanity of the U.S. Supreme Court decision that  makes it possible for states to remove the right to abortion.

The video, created by Norwegian ad agency Anorak, was launched June 24 and is currently trending on TikTok, having received 3.3 million views in the first 48 hours. It has been liked 939.5k times, shared 77.7k times and has prompted more than 12.7k comments.

Directed by Nicolina Knapp and produced by B-Reel Films, the one-minute-and-37-second film confronts the notion that America is “the land of the free.” The emotional film ends with the super “You’re Not Free” followed by “When You Can’t Decide Your Own Future."

A stark rendition of “Star Spangled Banner” plays as the scenes depict each subject’s emotional distress and powerless situations.

The idea behind the film came from the realization of the great contradiction that the United States, a nation that speaks louder about freedom than any other nation in the world, is now removing women's freedom to decide the fate of their own bodies, according to the international organization, which says it has more than 10 million members and supporters around the world.

“The hope for the campaign is to help Amnesty put pressure on those in power and all Americans in general and give them an opportunity to reflect on whether they can still call themselves ‘the Land of the Free,’” says Peter Power, a copywriter at Anorak, who was part of the creative team.

The campaign will run on digital and social media in more than 10 countries across multiple continents, and has been translated into six languages, including Chinese.

The effort includes a petition drive targeting individual state governments working to expand or restrict access to abortion. By contacting the governors of the states directly, Amnesty says it aims to influence those who hold the key to securing the right to safe and legal abortions.

“The unthinkable has happened, and there is an urgent need to create international pressure, especially in the 22 states that have passed laws that completely or partially prohibit abortion,” says Camilla Kolverud, Amnesty fundraising and marketing manager.