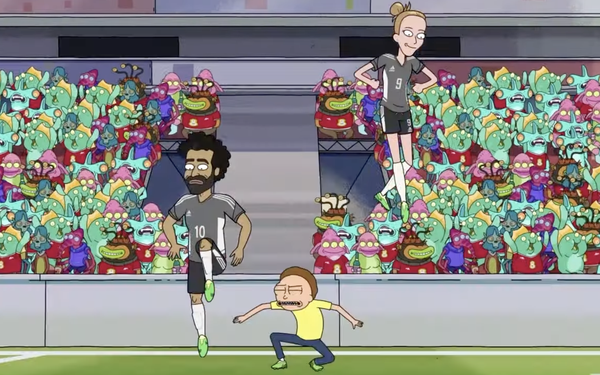 The World Cup doesn’t play out until November, but meanwhile here’s a spot promoting it (in a way), along with Adidas, from the minds behind “Rick and Morty.”

In the ad, Rick wakes Morty up and tells him he’s going to be a football (soccer) star. Soon, Morty is whisked to a room with teleporters that exchange the skills of Mohammed Salah and Vivianne Miedema. With these exchanges also come the desire to eat Dutch cuisine.

Rick then talks up the carbon fiber Soleplate in the shoe and sends Morty on to win the International Unlicensed Cup. With the help of the two stars, “puppet man,” as Morty becomes known, gets to have anything in the world. Of course, he chooses raw herring, but then questions why.

When Morty becomes enamored with his accomplishments, Rick resets those attributes and sends them off. Morty then asks for some of the sandwich that Rick is eating and is told “no.”

Now in its fifth season, “Rick and Morty” is a stalwart of the Adult Swim lineup. There is also talk of a feature film based on the characters.