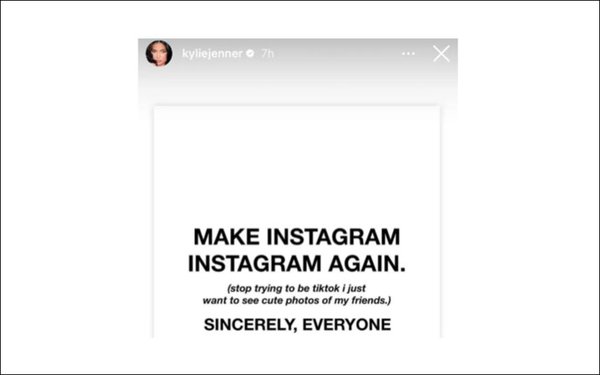 In response to bitter complaints from Instagram lovers — including primo influencers Kylie Jenner and Kim Kardashian — Instagram is retreating from a test version that opened to full-screen videos and photos driven by algorithmic recommendations.

Instagram CEO Adam Mosseri announced the decision in an interview with newsletter Platformer on Thursday.

But Instagram users have chafed at the shift away from the app’s traditional emphasis on image-posting.

The test format features Instagram’s Reels in the main news feed. It also includes content from users who lack a follower base — and more ads.

On Monday, Jenner and Kardashian posted a message to their hundreds of millions of followers urging that Meta “Make Instagram Instagram Again.”

“Stop trying to be tiktok I just want to see cute photos of my friends,” they wrote.

Mosseri initially responded to the celebs’ memes with a tweet — widely mocked by Instagram addicts — saying that Instagram will continue to “support” photo sharing, but also continue to evolve toward featuring more video content.

Apparently, he has since reconsidered.

“For the new feed designs, people are frustrated and the usage data isn’t great,” he said in yesterday’s interview. “So I think that we need to take a big step back, regroup, and figure out how we want to move forward.”

Underestimating the Kardashians’ clout has burned platforms in the past.

In 2018, shares of Snap dropped by nearly 7% — causing a loss of some $1.3 billion over a week — after Jenner criticized a redesign of Instagram competitor Snapchat. Snapchat, she declared, was “so over.”