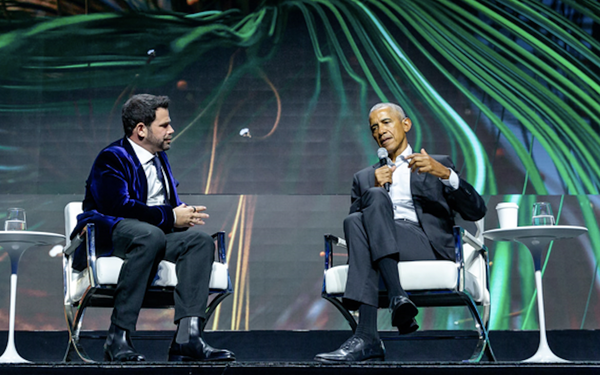 “The idea… that unless you tow the party line, they can take away your tax preferences -- that’s how authoritarian governments operate,” Obama declared to the Klick Ideas Exchange, which the healthcare ad agency held Thursday in the Brooklyn Navy Yard.

In other advice to marketers, Obama said that if companies paid attention to how the way they do business aligns with the values they espouse, they could stop feeling the need to comment on everything over social media. “Sometimes these gestures become a shortcut,” he said.  For example, “It’s easier to post a statement about Black Lives Matter than to examine your own hiring practices.”

While he was president, Obama declared, “I never watched cable and never read comments in social media…. I did not want my decision-making buffeted by whichever way the Twitter winds were blowing.”

The Klick conference, held after a 28-month delay due to the pandemic, took place in front of a fully vaccinated audience that also received COVID tests as they entered the facility. As Rick Bright, former director of the of the U.S. Dept. of Health and Human Services’ Biomedical Advanced Research and Development Authority, began an earlier talk at the event, “Is the pandemic over? No, 400 to 500 people every day are dying in the U.S. and around the world. The virus will be with us forever.”

Of course, such COVID diligence as shown by Klick is far from the norm these days, so Obama also addressed the refusal of a large percentage of Americans to get vaccinated.

He noted that he’s told Silicon Valley companies that “you have a glitch in your program right now, where things that we all know are not true and damaging, and that can ultimately kill, oftentimes are getting the wider circulation.”

In a keynote address to the conference, financier and healthcare philanthropist Michael Milken, who received a pardon for a securities law conviction from another President [Donald Trump], pointed to earlier periods in American history when vaccinations weren’t so politically polarizing -- starting with the nation’s very first President, George Washington.

In 1777, Milken said, then-Continental Army commander Washington ordered smallpox vaccinations for all troops. At the time, 90% of all Army deaths were caused by disease, not battle, he noted. The vaccinations, he said, are “probably one of the reasons we have a separate country from the U.K. today.”

In 1956, with a polio epidemic raging, only 0.6% of U.S. teenagers had been vaccinated against the disease, Milken continued. Then, Elvis Presley very publicly received a vaccination backstage at “The Ed Sullivan Show.”  Six months later, Milken said, 80% of teens had been vaccinated.

Last year, Milken revealed, his philanthropy tried to find a current-day Elvis to similarly sway the masses. “We did focus groups and could not find a person that a majority of the population would respond to like Elvis,” he stated.

George Yancopoulos, co-founder, president and chief scientific offer of Regeneron, told the Klick audience that it took about nine months to come up with the antibody medicine that “probably saved the life of the President of the United States [Trump].”

But Bright noted that it took decades of prior research and development to even start the process of developing COVID drugs and vaccines. Politics, however, drove the message that vaccines were developed quickly, helping lead to distrust of them, he said.

Tal Zaks, former chief medical officer of Moderna and now a partner at OrbiMed Advisors, related how Moderna developed a “very clear path to engage the public…We were sure the vaccine was going to work, but we had to talk to the public, journalists and politicians.”

Zaks said that he’s gotten used to people coming up to him on the street, congratulating him on the vaccine, but saying “I still got COVID.” His reply? “I’m glad you’re around to tell me about it.”