Publicis Sapient's 'All In' On The Metaverse, Finds VR Adoption Not-So-Hot 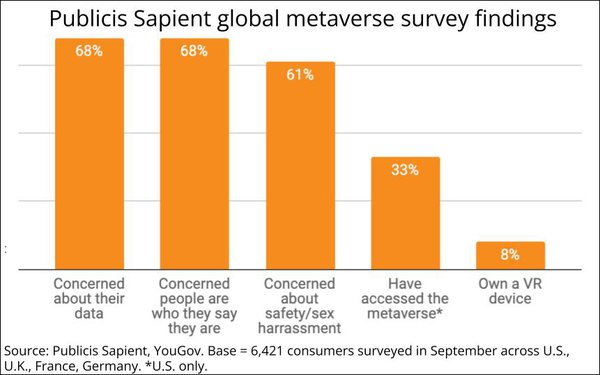 While questions remain about both consumer adoption and technological development, one of Madison Avenue's pioneering digital media developers is "all in" on the metaverse, and is also feeling the need for "speed" when it comes to many other new and rapidly evolving elements of Web3, including the blockchain, cryptocurrencies, NFTs (non-fungible tokens), DID (decentralized identifiers) and DAO (decentralized autonomous organizations).

While many of those concepts are still works in progress, Publicis Sapient outlined its own internal timeline (see below) for committing to and developing them for clients over the next five years. In fact, they agency even coined its own acronym to characterize the elements of it, and it is aptly called "SPEED" (for strategy, product, experience, engineering, data/AI).

It's own prioritization appears to be backed up by a global consumer study conducted with YouGov in the U.S., U.K. France and Germany in September, which found significant consumer uptake for the metaverse (a third of Americans have already accessed it, though consumers in other markets are lagging that), and not surprisingly, consumer angst about their data, their personal safety, as well as the authenticity of others they encounter on it.

"One in every four are accessing the metaverse using phones or laptops," Publicis Sapient Managing Director for Web3 Strategy AJ Dalal said referring to the global survey findings (see data below).

That said, Dalal said the agency's team was surprised to learn that "only 8% of global respondents said they own a VR device or headset," which in some ways is expected to be the on-ramp to the metaverse, at least for the next few years.

"Adoption within this area will continue to increase as technology evolves," he explained, adding, "I think the big hurdle in this space is the awkwardness of wearing a VR headset.

"I know I own one and I probably can wear one for about 30 minutes before I find it too hot, too tight and I just want to take it off." 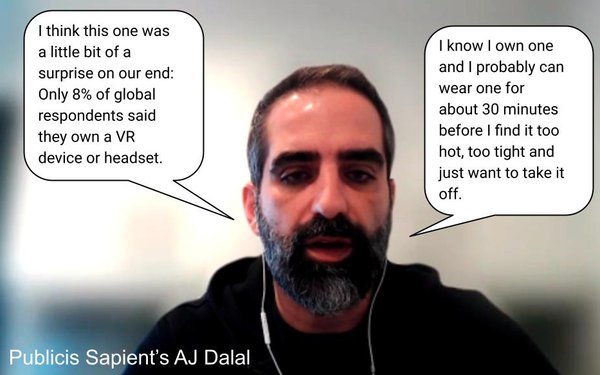 Other major findings from the study are that two-thirds or more of respondents are concerned about the security of their personal data, their personal safety, and being able to authenticate who other people or organizations are when they encounter them on the metaverse.

In terms of what consumers say they are most interested in experiencing on the metaverse are things like the ability to experience a vacation destination before they travel to it (No. 1) or "a way to interact or engage with family and friends (No. 2).

Citing its own history for being an early adopter in the development of the internet, Web 1 and Web 2 marketing experiences, the Publicis Sapient team said they already are embracing Web3 internally and even laid out an organizational timeline for the agency's strategy ranging from "all in" to "watch and learn" (see below). 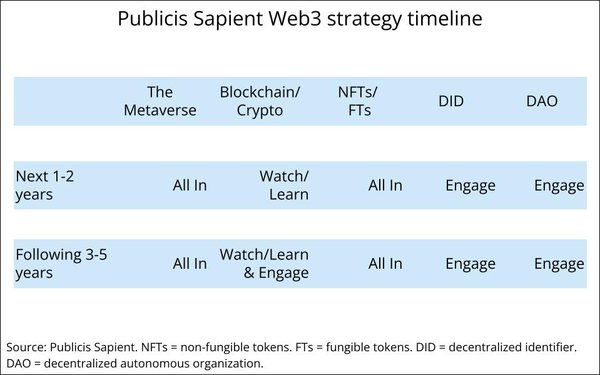