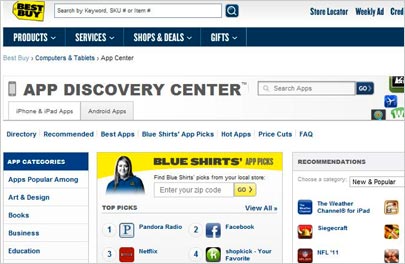 After selling you just the right smartphone, big box retailer Best Buy wants to help its customers find the right apps among the hundreds of thousands now in both Android and iOS markets. The newly launched Best Buy App Discovery Center is a directory of apps across both major operating systems, indexed on a more granular level than either the iOS App Store or Android Marketplace offer on their own. Best Buy is not only cataloging but curating apps, and it has also tied the new service to its local staff and markets.

Best Buy says it considers the app directory an extension of its customer support. “It’s a natural addition to our growing portfolio of services that make it easier for people to connect with the things and people they lover,” notes Wendy Fritz, senior vice president of computing, tablets and e-readers for the company.

The Best Buy service is powered by app indexing company Appolicious, which has also partnered with Yahoo. The main App Directory parses the apps into 1,200 categories, down to sub-groups such as Vegan or LOL Cats in Lifestyle, or Apps that are Popular Among TV Junkies. An app search engine uses social and user-generated data to inform results.

A list of Hot Apps floats to the top of the daily favorites in both Apple and Android stores. But Best Buy puts its own brand and local flavor on the directory with its “Best Buy Blue Shirts App Picks.” Here staff  members at a user’s local store provide their own recommendations. After a visitor enters a zip code, the directory serves up top apps from others who frequent that store and the service reps attached to the store.

Clearly Best Buy is targeting one of the common pain points for any new smartphone owner with this directory. But it is also creating a highly localized experience where the service is stamped with the identity of its nearby staff.

The directory itself from Appolicious is well done. It provides a range of supporting material around an app, from detailed editorial reviews to screens and occasional videos. It extends the notion of the retailer’s “customer support” now to include media choices.

It is hard to imagine the company not making the app finder itself into an app.