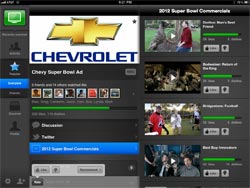 With the relentless growth of smartphone/tablet ownership and use in the last year, it comes as no surprise that Super Bowl XLVI appears to have produced record activity across living room second screens this year. In a flash survey of 1,100 mobile users during the Super Bowl, mobile ad network inMobi found that 40% were employing the device to respond to TV ads. Twitter -- which, according to Kleiner Perkins analyst Mary Meeker, gets more than half of its traffic from mobile devices -- posted last night that “In the final minutes of the Super Bowl tonight, there were an average of 10,000 Tweets per second.”

Perennial Super Bowl advertiser GoDaddy claims that even its odd use of a QR code in a TV spot helped generate record mobile response. The company reports this morning that its two spots advertising domain name and Web services resulted in more than 10 million people coming to its sites. But in an unexpected move, GoDaddy’s second spot for cloud services included an on-air QR code that demanded lightning reflexes on the part of the audience to scan with a compatible reader app.

Nevertheless, GoDaddy claims the promotion drove its highest traffic ever to GoDaddyMobile.com. “We decided it was worth the risk to play to all the people watching the game and using their smartphones simultaneously,” says GoDaddy CEO and Founder Bob Parsons in a statement.  The company also says it broke its own previous sales records off of Super Bowl campaigns this year.

Cahan tells Mobile Marketing Daily that this Super Bowl was the biggest event ever hosted on the app, and it resulted in considerable viral activity, with 40% of interactions in the app being shared across Facebook and Twitter. “At the height of the game we had 4000 to 5,000 threads and discussions happening simultaneously,” he says.

Over 40 on-air ads could be tagged in the app, and all received tags and like/dislike votes from users. In a deal with Pepsi MAX, the app automatically recognized the brand’s ad when it aired and registered the user for a contest to win Pepsi MAX for life. Cahan says that among eligible users, the app saw 70% participation in the contest.

Audio ID app Shazam says it enjoyed record response within its apps, which recognized about half of the TV spots running during the game breaks. Sponsors including Toyota, Best Buy, Pepsi, Bud Light and FedEx ran complementary material in the Shazam apps when users tagged the respective ads.

The app also had a special half-time mode that complemented Madonna’s performance with links to song downloads and other material and a track download sponsored by Bud Light. “We had high expectations for how many people would be engaged during the event and with the numbers in the millions we were blown away,” Shazam CEO Andrew Fisher said in a statement this morning. The company says it will be following up the Super Bowl integration with a similar complement to the Feb. 12 Grammy awards telecast.

Another TV complement app, Umami, audio IDed the Super Bowl to run real-time stats, play-by-play reporting, Tweets and responses to ads. The company reports to Mobile Marketing Daily that it experienced a 250% increase in unqiue users last night relative to nightly averages, and a 330% increase in page views.

Finally, the GetGlue service, which allows members to check in with entertainment experiences across Web and apps, says it had a record-breaking 150,000 check-ins for the game.

Despite the close game occurring on the main screen as the Giants and Patriots went down to the wire, people appear to have been engaged in their second screen. Among inMobi’s respondents, 45% estimated they would be spending 30 minutes or more on their mobile phone during the game. And 39% of mobile users were interacting with the ads in a range of ways, from discussing commercials to getting more information about a product to simply re-viewing an ad on their devices.

The company also found that 30% of mobile users were accessing the device most during the commercials and 27% had downloaded an app related to the Super Bowl.