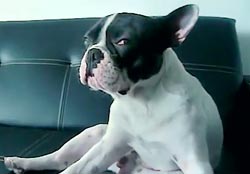 Every dog owner knows their pet is “good.” Purina Pro Plan, with a new marketing campaign, is giving them a chance to make their dogs “great.”

A new advertising campaign for the brand from Leo Burnett and Arc Worldwide celebrates dogs of all stripes, pointing out “Inside Every Good Dog is a Great Dog.” The campaign includes a television spot, as well as social, mobile and out-of-home elements.

Featuring a song written and performed by Rogers (which he wrote as part of the agency’s pitch for the business), the commercial shows dogs of all stripes going through their days, lying on the couch, sleeping in their beds, playing fetch. As the music picks up, the spot interweaves exceptional canines, such as rescue dogs, therapy dogs and assistance dogs, in addition to more typical dogs. The spot ends with the tagline, “Inside Every Good Dog is a Great Dog.”

Noting that many people like to post and/or view videos of their dogs on Facebook and other social media, the agency created a Facebook app that allows dog owners to insert pictures of their own pets into the commercial to share with friends.

“That’s imagining your dog among these awesome dogs,” Rogers says. “Thinking about personalizing something can [add] that much emotion to it.”

The campaign launched to coincide with the recently concluded Westminster Dog Show. To take advantage of that audience, the agencies also created an interactive mobile website that compiles information about the 180 different breeds present in the show. The agency also wrapped a New York City bus with the campaign’s tagline and images from the commercial.

Though the mobile app (and Westminster-themed advertising) is geared toward purebreds because of the dog show, the campaign is not leaving mixed breed dogs behind. The song Rogers wrote to accompany the commercial is available on iTunes, with proceeds going to benefit Purina Pro Plan’s Rally to Rescue cause.