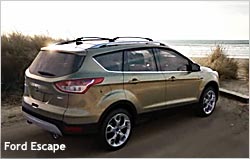 Ford unveiled the 2013 model of its Escape compact SUV earlier this year in Louisville, Ky. That makes sense, as the vehicle will be built there. But maybe the company should have held out for the New York auto show. After all, New York is the biggest SUV market in the U.S. Say what? That’s right, according to Erich Merkle, U.S. sales analyst for the Dearborn, Mich. automaker --11% of all SUVs are in greater metro New York.

Merkle was also in New York last week talking to the International Motor Press Association about Ford product strategy and sales trends. "Our job is to predict needs," he said, pointing out that demographically, booming sales of smaller crossovers like Escape are being driven by Boomers, many of whom are in their 60s. But he said the 80 million or so Millennials, who are currently only about 13% to 15% of new-vehicle sales, are going to be a major factor. "Both Baby Boomers and Millennials need these smaller vehicles," he said.

Thus, there is a big opportunity for small-SUV sellers right where the two demographics overlap, per Merkle. "We will see a convergence of needs. The Millennials will form families and require more room, better fuel economy, utility and value, while Boomers are downsizing -- 10,000 Boomers per day are retiring. And that will continue over the next 18 years, so affordability is important to them as well."

Sales of small utility vehicles have grown precipitously since 2007, when they were about 700,000 vehicles. "It hit 1.8 million vehicles last year and has, in fact, recovered to pre-recessionary levels," said Merkle, adding that small SUVs -- about 20% of the utility market in 2000 -- are now about 43% of the mix, with large SUVs now only about 8% of total mix of SUVs.

Back in the Northeast, small utility sales are over 26% of the market, per Merkle. "Utilities are to New York what pickup trucks are to Texas," he said, adding that in 2004 small SUVs were 36% of the new-SUV mix, and now they are 53% of the mix. Ford sold 254,293 Escapes last year -- a 33% increase versus a year ago -- making it, per Merkle, the best-selling utility in the U.S.

Merkle told Marketing Daily that fuel economy -- once a non-issue among SUV buyers -- is now a leading point of consideration for those shopping SUVs, and not just compacts. This year will be a big fuel-message year for the Dearborn automaker, which is launching several electric, hybrid, plug-in hybrid and efficiency-enhanced gasoline-powered vehicles and engines: the Focus Electric in showrooms now; the EcoBoost (Ford says EcoBoost technology offers 20% better fuel efficiency and 15% reduced greenhouse emissions than traditional engines) is a big message point; and Ford will introduce the C-MAX Energi vehicle this fall -- a crossover that, kind of like Chevrolet's Volt, runs on pure electric until the charge is depleted before switching over to a small gas engine.

Ford says the latter vehicle may achieve the equivalent of 100 mpg. There will also be a hybrid version of the vehicle. C-MAX also shares its underpinnings with both the Focus and Escape and is built at the same Michigan assembly plant, which Merkle says allows Ford to go with the flow. "It's our view to make this viable we have to electrify the platform and communize -- make the same products at the same assembly plant -- which gives us flexibility."

Ford is also marketing the fuel messaging around Earth Day with its SHFT.com documentary series that focuses on ten green-technology innovators. The company is promoting the Focus Electric car with a social-media “digital road trip.”

The fuel focus will matter a lot. A recent Kelley Blue Book survey on consumer sentiment from the first quarter this year says about 66% of new-car shoppers have either changed their minds about which vehicle they are considering, or are thinking about vehicles they normally would not have considered, due to rising gas prices. And the study also found that consumers are not optimistic, with their expectations about the direction of gas prices worsening. Three-quarters of new-car shoppers said they see higher gas prices in weeks to come. In the fourth quarter last year, fewer than half of respondents said that.

KBB says that fuel economy is now the second priority on the must-have list when looking for a new car or truck. Number one is warranty as the most important feature.