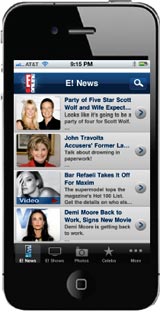 Because smartphones are far more widespread than tablets to date, however, they still account for the vast majority of time spent watching mobile video: 79% versus 21% for tablets on premium properties. The latter figure is roughly proportionate to estimated tablet penetration of 15% to 20% among U.S. mobile users.

Across both types of screens, entertainment news properties like E! Online and TMZ are proving especially sticky. Of the top 10 video clips in the category, more than half are watched twice per unique viewer.

When it comes to advertising, virtually all campaigns (93%) on the Rhythm network included in-stream video ads, either as a commercial break in full TV episodes or before video clips. That’s the same rate as the prior quarter, but up from 66% in the year-earlier period.

Adding social media buttons to in-stream ads helped increase the average engagement rate (defined as any type of interaction) from 0.9% to 1.48%.

The report also highlighted the benefits of combining different ad formats in a campaign. Pairing full-page mobile ads with in-stream video ads, for instance, increased average engagement from 9.3% to 10.7%, while adding video ads to a banner campaigns on tablets lifted interaction rates from 0.6% to 0.8%. Full-page ads on tablets had a 20% interaction rate -- more than twice that on smartphones.

Rhythm said its mobile video ad inventory on more than 200 apps and sites owned by publishers, such as NBC Universal, ABC, IAC, and Warner Bros., accounted for nearly a third (32%) of all monthly mobile video viewing. That estimate is based on Nielsen data showing that mobile subscribers in the fourth quarter of 2011 watched mobile video an average of four hours and 20 minutes a month.

Nielsen’s cross-platform report for the fourth quarter indicated the mobile video audience is still small but growing. Some 33.5 million watch video on their phones, up 35% from 27.4 million a year ago.

The data from Rhythm NewMedia is based on ads served across iPhone, iPod Touch, iPad, Android and other devices in the first quarter. It covers ad campaigns from more than 140 brands including P&G, McDonald’s, Disney, Paramount, General Motors, Ford, AT&T and Macy’s.