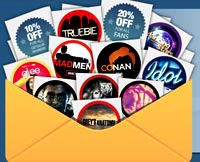 The popular entertainment check-in app GetGlue is planning a major update of its mobile applications that is aimed as much at media discovery as it is at social TV. Company CEO Alex Iskold made a video for GigaOM last week outlining his plan to move the functionality beyond check-ins and conversations around media and to “reimagine discovery around TV.”

The next iteration of the apps will help viewers discover new content on TV. “With this update you will see a lot of utility returned on top of social,” he says. The app will try to bring onto the “second screen” more content about the TV shows themselves like news and photos, which often send users across other sites and apps.

The big new idea in GetGlue HD is to update the classic TV guides and directories with more customized recommendations. The guide is designed to be smart about what you are used to watching, the current time and location, and what is on the immediate horizon in the programming grid. The app will make suggestions for what to watch both now and later.

While Iskold references synchronized second-screen programming, he mentioned that GetGlue is placing its bets on simple functionality and the desire of entertainment fans to discover more of what they love.

In enhancing the basic check-in functionality that has been at the heart of GetGlue all along, the company is competing more directly with the more robust and content-rich second-screen offerings like Yahoo’s IntoNow, Umani and many others in the cluttered space.

GetGlue claims 3 million users. The Web and app-based platform awards badges for checking in to a range of entertainment types.

mobile, tv
1 comment about "GetGlue HD To 'Reimagine Discovery Around TV' ".
Check to receive email when comments are posted.
Next story loading