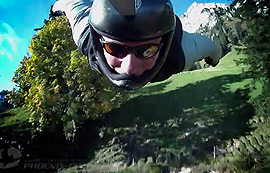 The program's hub, at www.hondainnovator.com, allows people to tweet questions to the stars of the spot, which connected Honda's innovative technology and design with inventions, ergonomics, and industrial design and some fairly treacherous activities for which a couple of the inventions were designed.

As part of the social program, people can ask questions of some of the featured folks such as a wing-suiter -- a guy who leaps from cliffs, and mountain peaks with suits designed to allow a certain degree of forward motion -- videos of which are a huge hit on YouTube.

A key component of the program happens this month, wherein Honda will run a series of hour-long tweet chats with the innovators from the TV spot. The events, staggered throughout February, allow people to talk to the wing-suit guy on Feb. 5; the maker of the 4moms Origami Stroller two days later; the pro surfer Shane Dorian -- maker of the Billabong wetsuit -- on the 12th; then the Civic engineers three days later. After that are the inventors of the Waterfall Swing, a swing set that drops a synchronized curtain of water for each rider; and the designer of the laser keyboard, by which a smartphone or other device can project its virtual keyboard onto any surface.

The automaker says that it has also made an "Innovation Playlist" on its YouTube channel. The playlist features a deeper look at technology showcased in the Civic spot. Facebook posts will introduce fans to the “Innovator Series” and related album. Instagram will host behind-the-scenes photos from the Civic TV commercial and an assortment of Civic photos. And Pinterest will feature a “Things Can Be Better” board.

Social news and visuals channel BuzzFeed will run sponsored posts about the creative theme of the broader theme of the Civic campaign around invention and engineering, and the “Innovator Series” program will be supported with promoted tweets, promoted posts on Facebook, YouTube ads and search.

Alicia Jones, social media manager at Honda, tells Marketing Daily that the Civic social plan was being formulated when the Civic TV launched in early January. "Since the TV features cool innovators and inventors, we hoped the TV spots would pique the public’s interest. As anticipated, we received feedback from fans on many of our social channels." She adds that in addition to the three TV spots that launched the campaign in early January, there is integrated print throughout the first half of 2013 and several high-impact Civic media and digital placements planned surrounding the Grammys.