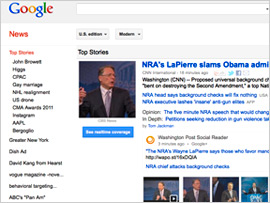 The digital landscape is as unsettled as ever for traditional news organizations, with the mobile era adding a new level of upheaval. While digital and mobile platforms are expanding the news audience, revenue streams from newer formats remain small.

On the audience side, the share of people getting news online or from a mobile device “yesterday” reached 39% -- up from 34% in 2010, when the Pew Research survey was last conducted. Mobile is playing a key role in that growth, with 45% of U.S. adults now owning a smartphone and 31%, a tablet computer. And they are avid news consumers.

Fully 64% of tablet owners say they get news on their devices weekly, and 37% daily, with nearly identical figures for smartphone users. Moreover, 31% of tablet news users said they spend more time with news since getting their device. Another 43% said the tablet is adding to the amount of news they consume.

Even as readers migrate online, they still look mainly to established news brands. The sites of newspapers, cable and network news account for 20 of the top 25 most popular news sites. Yahoo News remained No. 1 in 2012, enjoying a traffic boost driven in part by its content partnership with ABC News.

Facebook and other social sites continued to drive traffic to those sites and expand their role in the news ecosystem. Nearly a fifth (19%) of Americans saw news or news headlines on a social network last year, up from 9% in 2010. That figure rises to 34% among those ages 18-24. Mobile is playing a key role here too, with 47% of smartphone users saying they got news via a social network “sometimes” or “regularly.”

News remains a tiny player in a digital market dominated by Facebook and Google. Those two, along with Yahoo, Microsoft and AOL, accounted for 64% of digital ad spend in the U.S. last year, unchanged from 2011. That leaves only a small share of the pie for news organizations.

News companies still face the harsh economics of digital advertising. If Web ads bring in only a fraction of revenue earned by print ads, mobile in turn brings in only a fraction of that from Web ads. If the average Web CPM is $3.50, mobile ads is just 75 cents, stated the report, citing data from a Mary Meeker presentation.

To get beyond low-paying banner ads, publishers have turned to more lucrative formats, including video ads and native ads -- the digital term for advertorials. But the report notes that the latter approach carries risks, pointing to the criticism The Atlantic came under for running a laudatory ad by the Church of Scientology this year.

To avoid such options and the downward pressure on ad rates, news organizations -- most prominently The New York Times -- have erected digital paywalls to bolster revenue. About 400 of the country’s 1,350 papers have instituted metered payment plans or are planning to do so this year.

But the paid approach is hardly any guarantee of prosperity, even for what is considered a successful pay model adopted by NYT. The newspaper reported fourth-quarter profit fell 12.3% as growing subscription and digital ad revenue failed to offset the continue decline in print advertising.