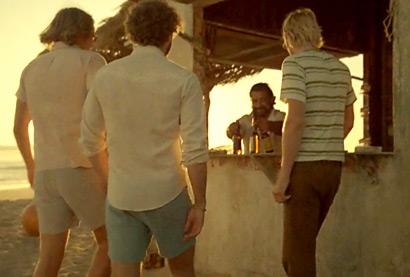 Pacifico is highlighting its surfer roots in its latest creative.

The pilsner-style Mexican beer is launching a multimarket TV and digital campaign aimed at the adventure-seeking consumer.

Carrying on the spirit of its marketing campaign, “State of Pacifico,” the new work created by GSD&M will roll out in mid June in Southern California and Austin as well as nationally on digital sites such as Hulu and YouTube. All work is scheduled to run through October.

In the first spot, “Original Explorers,” the work tells the story of a group of surfers in the 1970s who happened upon Pacifico in the cantinas while on a surfing adventure down the Baja peninsula. They loved it so much that they brought cases back to the U.S. The spot concludes with the line “Pacifico Beer. Discovered in Baja, Imported by surfers.”

The second spot, “Spin the Bottle,” features a group of friends who are living the Pacifico lifestyle. The friends start their adventure by spinning an empty Pacifico bottle on top of a map. Whatever direction the bottle is pointing when it stops is the direction the group heads for their next adventure, which includes activities like surfing or cliff jumping.

When the adventure is complete, they get out the map and start over again. The spot ends with the question, “Do you take Pacifico places, or is it the other way around?”

All TV work will drive consumers to STATEOFPACIFICO.com, Pacifico’s virtual “locals-only” Facebook hub that houses more than 40 videos of off-the-beaten-path hangouts and experiences.

The site also offers an interactive map of locally recommended hot spots to visit across the U.S. and user-generated content, which encourages consumers to live and share their Pacifico adventures.

“With this new creative, we are recreating the story of the original importers of the beer. The surfers that were looking for the legendary waves down in Baja Mexico ended up discovering a great beer,” said Jim Sabia, chief marketing officer at Crown Imports, Pacifico’s exclusive U.S importer, in a release. “Today, that fearless and determined mindset of a Pacifico consumer is even more prevalent and has led the beer to become a top choice for those always seeking out new adventures.”