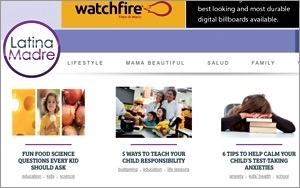 Over the last few years, marketers have been paying more attention to the growing population of acculturated Hispanics in the U.S., including younger adults -- many of them born here -- who prefer English to Spanish. To reach this  rapidly growing demographic, with a specific focus on the lucrative sub-group of mothers, Moguldom Media is launching a new Web site, Latinamadre.com.

Despite its Spanish name, Latinamadre.com will target acculturated Hispanic moms who prefer English with a range of content, including parenting, fashion, romance, work and entertainment. Moguldom already operates a number of other Web sites targeting niche female audiences, including Madame Noire, Bossip, Lossip, Mommy Noire, and StyleBlazer, among others.

With native births replacing immigration as the main source of Hispanic population growth in the U.S., the number of acculturated Hispanics is rising fast. While the definition of “acculturated” varies, it can include adult immigrants who have lived in the U.S. for decades, as well as teens and young adults who arrived as young children or were born in the U.S. and often prefer English.

Still, the Hispanic birth rate remains high, and new Hispanic mothers tend to be younger than the U.S. average.

As noted, advertisers and media companies are realizing the need to address the growing population of acculturated Hispanics. On the media side, in October ABC joined forces with Univision to launch a new cable and satellite TV network, Fusion, targeting millennial Hispanics with English-language content.

Also last year, Orci, a Hispanic ad agency, officially announced the launch of COR, a new agency targeting the “new general market,” including the growing acculturated Hispanic population. COR was created by Andrew Orci in partnership with Rich Colby, formerly of Colby & Partners, with Andrew serving as CEO and Colby serving as president and creative director.