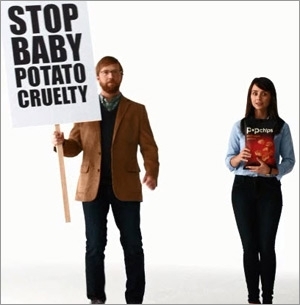 Now, faced with growing competition from copycat products from bigger rivals — including Quaker's Popped, Kellogg's' Popcorn Chips and most recently Mondelez International's Wheat Thins Popped —  Popchips is pumping up its marketing strategy, investing $15 million in a campaign anchored by its first television ads.

The new national campaign, "The Popchips Way," is also the first created with a new agency for the brand, New York-based Dandelion, founded by Kirt Gunn.

Since its launch, Popchips — originally based in San Francisco, now in Los Angeles — has focused on product sampling through field marketing and events on the West Coast and in other urban markets, and on creating a robust online/social presence through videos and endorsements featuring celebrities/minority owners including Ashton Kucher, Katy Perry and Sean "Diddy" Combs.

That strategy helped it secure distribution in 30,000 retailers across the country, as well as private-equity firm infusions, along the way. (Most recently, in 2012, TSG sold its Popchips stake to Brussels investment firm Verlinvest.)

But outside of cities where density enables "hand-to-hand marketing," awareness of the brand is still "quite low," and television is the logical channel to "connect the dots across the country" and "bring up awareness quickly," Marc Seguin, who became Popchips Inc.'s CMO this past April, tells Marketing Daily.

The campaign represents a shift from building buzz via Millennial-friendly celebrities to conveying the product's benefits to a broader audience. The core target is women 25 to 50. Challenge: Convince mainstream, fried snack-addicted Americans that a healthier option can actually taste good.

The TV spots (three 30-second and two 15-second versions) — the first of which began airing on Sept. 22, during the season premiere of NBC's "The Voice" — repeatedly weave a description of the product's popping process and its "all the taste, half the fat" positioning into humorous dialogues between "Ed and Jane," a young-adult couple played by actors with improv background. The agency tapped veterans of popular sitcoms to write the copy.

Another version, featuring "Ed" and other male actors, will begin airing in cinemas next week, reports Seguin, who was formerly VP of marketing at Wonderful Pistachios parent Paramount Farms, and is part of a new management team. (Founder Belling, while still on the company's board, brought in Paul Davis, a former Frito-Lay executive and Coinstar CEO, to succeed him as Popchips Inc.'s CEO in December 2014.)

They're also front-and-center on Popchips' newly redesigned Web site. The site, says Seguin, was designed to be "best-in-class" within the snack category, offering a product locator that's updated in real time, as well as speed and compatibility across mobile devices. It will be frequently updated with "engaging branded content," combined with "organic conversation" via social feeds and sharing tools, to provide a seamless cross-platform experience, he says.

Seguin fully expects television to continue to be a key platform for the brand for some time. "We have a lot of headroom," he notes, pointing out that Popchips has a household penetration of about 5%, versus the 60% or so penetration of some leading salty snack brands. "One flight of TV is not going to close that gap." The current campaign is using cable channels, as well as prime-time shows, to reach the female target audience.

But the brand will also continue to employ sampling and events, paid digital advertising and social posts, out-of-home and other media, Seguin confirms.

Nor is the existing, hip urbanite base being abandoned: One element of the campaign is blanketing Manhattan and Hollywood with billboards. Further, the company (which acknowledges that several celebrities are still investors, without naming them) has made it clear that it may again use celebrities in its marketing, on a selective basis, down the road.

New-product development and other innovation are also part of the ramp-up strategy. Popchips now has veggie and tortilla lines as well as potato chips (rice chips have also been mentioned as a possibility), and these are offered in three different sizes of variety packs.

Further, to add value that it believes will enhance its competitive positioning, in this year's first half, Popchips upped the amount of product in its packages by 15%, without increasing its suggested retail price. The conversion process — which Popchips told The Wall Street Journal cost it about two months' worth of sales (sales dropped 18%, to $53.6 million, in the 52-week period ended Sept. 7 vs. the previous 52 weeks, per IRI) — speaks to the brand's deadly seriousness about becoming a staple snack in U.S. households.