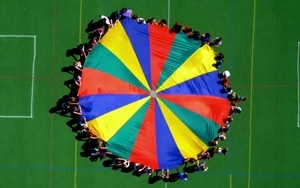 Every new television technology comes with an age-old problem: How to sell the new advances when the majority of consumers have sets that can’t demonstrate the improvements.

To highlight the quality visuals available on Ultra-HD television, Vizio premiered a 14-minute documentary at this year’s SXSW festival. According to a synopsis, the film, called “Growth,” is “an exploration of the universality of growing up through the eyes of those who have experienced it first hand.” The film is shot entirely from above using drone-mounted Ultra-HD cameras, and features 75 different people.”

“We sought to create a beautiful narrative that also reflected the Vizio brand personality traits, which we hope would resonate with fans of our brand,” Lily Knowles, vice president of product marketing for Vizio, tells Marketing Daily. “[Our message] is ‘Beautifully Simple,’ so it was important to not only create a beautiful story, but one that was filled with great visuals to show off the vibrancy and immersive qualities of our P-Series Ultra HD Smart TV collection in poignantly simple ways.”

A trailer for the film uses unique imagery from above to create a sense of universality of growing up around the world. The trailer begins with a girl dumping marbles across a tile floor amid a collage of voices saying “growing up.” Amid images of children playing, kids explain — off camera — how they view growing up. “Your body changes; you get bigger,” says one. As the activities mature (skateboarding, getting married), a man describes the sense of impatience many feel when it comes to growing up. “I want to drive. I want to drink. I want to move out,” he says. “I feel it takes your whole life to become young.” The trailer explains the film is “A Vizio documentary,” and highlights the brand’s work with digital production house Everdream, before closing on a father working with his child on learning to crawl.

“Vizio believes strongly in the importance of seeking unique methods to tell our story of innovation,” Knowles says. “The collaboration with Everdream on ‘Growth’ really helped bring our vision to life in terms of what original content from a brand can look like.”

It’s unclear where the film might be shown after the SXSW festival, although Knowles noted that the trailer can be viewed on the brand’s Web site.