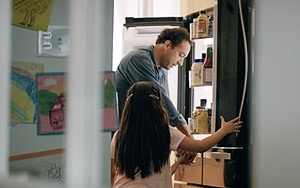 Whirlpool's "Every Day, Care" campaign continues to celebrate nontraditional families with "OK," the third commercial to illustrate how Whirlpool appliances fit into the lives of single parents.
Developed by Whirlpool's agency DigitasLBi, the concept maintains the story-telling arch that began in May with "Dad & Andy" and "Finding Time" to convey the sacrifices family members make "every day," said agency executives.

To that end, the "OK" ad looks at how the Double Drawer French Door Refrigerator lets a dad be flexible with his daughters – and sometimes not.

All three spots were directed by Beligum-born director Arnaud Uyttenhove, who was selected for his "authentic style" that influenced his 2010 directional debut "Somewhere to Disappear," as well as his projects with Chrysler's 2014 Super Bowl spot with Bob Dylan.
“Having to fit within our Every Day, Care campaign, we needed a director that could capture the reality of caring for somebody day in, day out, while bringing a fresh perspective to the film.  Arnaud did just that,” said Michael Frease, SVP, Group Creative Director, DigitasLBi Chicago.
The TV buy runs across cable networks including channels like Food, HGTV, USA, TLC, ABC Family, Cooking Channel and OWN. This new spot is supported with a multifaceted campaign including online video and online advertising, a masthead on Whirlpool.com, product landing page, and social media outreach.
DigitasLBi originally launched the Every day, care campaign in October, 2014 to connect Whirlpool's portfolio of products to the "value of the everyday care we give our families."

The brand spent nearly $50 million on advertising last year, up from $23.4 million in 2013, according to Kantar Media.

As Whirlpool’s agency of record since 2001, DigitasLBi is responsible for all above-the-line creative, experience design, digital creative, media planning and technology.