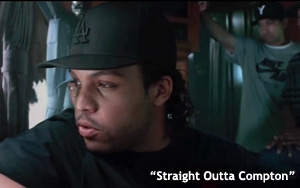 Not only did Universal Pictures’ “Straight Outta Compton” exceed U.S. box office expectations for its weekend debut; it was also relatively efficient when it came to its national TV spending.

Pulling in $60.2 million in U.S. box office revenue, “Compton” has spent a total $23.1 million in national TV dollars, according to iSpot.tv -- with the major build up of its spending started around July 20.

By way of comparison, Warner Bros. pulled in a humble $13.5 million in U.S. box-office revenue for the first weekend of “The Man From U.N.C.L.E.” It has spent $31.3 million over its entire pre-launch.

On the flip side, the underperforming “Fantastic Four,” from 21st Century Fox, in its second weekend, pulled in an expected weak $8 million in box office, now totaling $41.9 million with spending of $24.2 million in total national TV advertising sales.

STX Entertainment's “The Gift,” also in its second week, earned $6.5 million, now at a total of $23.6 million. It has spent $11.4 million in total national TV advertising.