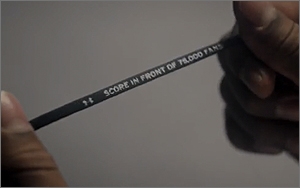 Baltimore sports apparel juggernaut Under Armour is tying its laces with its first global football (soccer for Americans) campaign, “Slay Your Next Giant.” The campaign, via UA's agency of record Droga5, centers on creative that puts inspirational sayings on players laces.

The digital story features Memphis Depay of Manchester United, Cameron Carter-Vickers of the Tottenham Hotspur Academy, and as-yet unknowns from Brazil, Chile, Mexico, and the U.K., developing their talent on grass pitches, cement courts, and empty lots all over the world. Additional storylines feature Jermaine Jones of the MLS’ New England Revolution, Oswaldo Alanís and Jesús Corona of the Mexican National Team, and Gonzalo Fierro of Colo-Colo in Chile. Each player’s story is united by the final phrase “You’re just getting started,” which speaks to the ethos of the brand’s global football category as a whole.

The ads show players removing their laces, reading the sayings and saving them as a talisman. The company says it will give players customized laces engraved with a personal goal, each pair representing a new giant to slay. As players reach each milestone, they will symbolically remove their laces and replace them with a new pair, sharing their journey to greatness on social media channels along the way.

Said Peter Murray, VP, global brand and sports marketing, Under Armour: “We’re going to be with every player every step of the way, bringing down every giant he or she faces. We’re making a statement, we’re standing by it, and we’re pushing forward in a big way with our global football category.”

The effort includes a Web site, SlayYourNextGiant.com, with video profiles of the sponsored athletes and a call for social media participation where people can make their own lace image for Facebook and Twitter.

Under Armour has been more aggressive in marketing as it rolls out new products. The NFL and Under Armour recently extended their relationship around the NFL Scouting Combine, and even has products in the red planet with the Matt Damon flick “The Martian.”