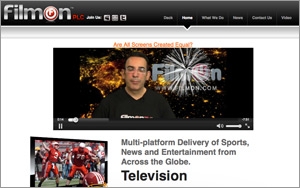 CinemaNow -- founded in 1999 by a group that initially included Cisco, Lionsgate, Echostar and Microsoft -- was once viewed as the forerunner of what a digital movie and TV platform could become.

CinemaNow was formerly the digital entertainment brand for Best Buy for about five years -- a relationship that ended in 2014, when it sold the CinemaNow business to Reliance Majestic Holdings and its private equity owners.

FilmOn also announced that it has launched FilmOn Premium, which will expand the reach of CinemaNow’s content to FilmOn.com’s 70 million monthly users around the globe.

Alki David, chief executive officer of FilmOn TV Networks, stated: “Our goal has always been to advance legal access to great content for the benefit of the consumer. Now, we’re working with all the major studios and broadcasters to build the future of entertainment together.”

FilmOn has been engaged in a long battle with TV stations over the ability to stream over-the-air signals. In November, a U.S. district court said it was not entitled to a compulsory license to retransmit the broadcasts.

Financial details of the deal were not disclosed.