A Device For Waffling Cord-Cutters 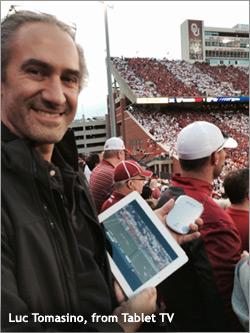 Even prideful cord-cutters and cord-nevers run into this:  The times they really do want to watch over the air television.

I’d say the reasons for that must be declining. Many television series are available quickly online; particularly, if you pay for it, live sports is more do-able than ever.

Still there should be a market for Tablet TV Plus, which brings local TV signals to your iPad, with a DVR capability, and the ability to go between the TV broadcast to Internet functions if you’ve got a Wi-Fi connection.

“You can watch a football game and go from that to Netflix and back again, or check your email,” says Luc Tomasino, the consultant and launch director. “You can even go split-screen.”

If you subscribe to Chromecast or have Apple TV’s Airplay, your local TV channel can be cast to your TV set, too.

But no wi-fi is necessary for the just-TV part of the Tablet TV device. It uses the ATSC distribution; it’s about as simple as it gets:  A seven-inch antenna attached to a cigarette-pack sized base attached to your iPad does the trick.

For $90, it’s a cheap solution, but with the same geographic limitations over-the-air has; if you’re more than 35 miles or so from the broadcast towers in your market TabletTv will be of limited use to you.

Tomasino’s a big Oklahoma Sooners fan and took his Tablet TV and iPad to a game last fall and watched along as the game played, for real, before him. A gang of fans at times swarmed around him for replays and commentary.  That’s the kind of video tie-in that stadiums are now building into their digital tech improvement plans now. Tablet TV is a much simpler solution.

Updating Tablet TV occupied the owners, Motive Television and Granite Broadcasting Corporation, for most of last year. “The new version added the interface and over-the-top capabilities,” Tomasino said.  “I think we were all surprised OTT took off so aggressively in 2015,” he says.

The Android edition of Tablet TV Plus should be coming soon, but Android users can use the un-plus version that doesn’t have the OTT compatibility of the later model. (When Plus comes to them, they can upgrade for free.)

Who wants this? Well, Tomasino says, Tablet TV is indeed attractive to millennials, who are supposedly loathe to watch TV or subscribe to cable.

Beyond that, he thinks, it’s “more of a lifestyle.” Typical users are also people seeking a different kind of second screen users that want broadcast TV in the mix. Tomasino also says it’s good for travelers and says some on-location TV and film hands are using it as a compact, limited DVR. Of course, if you want to over the air TV in your backyard, Tablet TV is a pretty easy solution too.

Another plus: Those DVRed programs reside on your iPad and can be easily summoned on a plane or anywhere conventional television isn’t available.

Tomasino won’t give sales figures, except to say since the introduction of Tablet TV Plus in November, it’s “sold-through well,” almost solely through mentions on the Internet. (The device isn’t available from big box stores.)

Its sales are apparently modest enough that when  Digital Trends.com posted a nice review--”a great little device,” said the reviewer -- Tablet TV Plus saw a noticeable bump in sales.

There’s another wrinkle that could be down the line. Tablet TV has been talking to studios about using unused portions of TV station spectrum to create its own video-on-demand service. “That’s part of our business model,” Tomasino says.