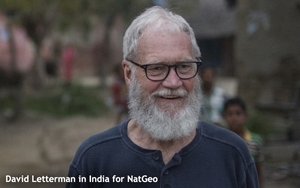 From Ron Howard on “Mars” to David Letterman in India, National Geographic Channel is spanning the globe and blasting off into outer space this upfront season.

The channel, along with co-owned Nat Geo Wild, announced a very ambitious and wide-ranging slate of new shows and special-event series Tuesday morning at a press presentation and briefing in New York.

Connecting the magazine to the TV networks under one umbrella will create new opportunities for cross-promotion, such as a story slated for the cover of next November’s edition of National Geographic magazine about efforts under way to bring about the eventual colonization of Mars.

The cover story will coincide with the premiere on the National Geographic Channel of one of the special-event series Nat Geo announced Tuesday. A six-part miniseries called “Mars” will combine documentary and scripted elements. Currently in production, the miniseries is being overseen by Ron Howard and partner Brian Grazer of Imagine Entertainment.

“[Nat Geo is] urging us to sort of find this nexus between science, true-life adventure and the drama of our human experience in a scripted format. Intercutting the scripted material with the interviews and the documentary footage [will] offer a really powerful experience for audiences,” said Howard, who appeared at the upfront event.

The next one in the series is “Killing Reagan,” adapted from O’Reilly’s book about the attempted assassination of President Reagan, premiering next fall.

“In terms of scripted, there is both audience and advertiser demand for scripted television from National Geographic,” Monroe said. “Our ‘Killing’ franchise [productions] are the three most-watched shows in our history.

“While we have no intention of becoming an all-scripted network, what I want you to know is that scripted is going to be a hallmark of our premium content,” Monroe said.

Still, it was clear from much of the rest of Nat Geo’s presentation on Tuesday that documentary programming that is global in scope will continue to be the channel’s bread and butter.

In this category, the network announced a slew of upcoming projects that will take viewers to a host of exotic locations they’ll likely never visit themselves -- from the wilds of Antarctica and the battlefields of Afghanistan to the farthest reaches of the planet’s “lawless” oceans.

Among the new shows and special events announced by Nat Geo were:

“Earth Live!” – a worldwide, live telecast featuring camera crews stationed around the world and in position to capture the natural world in real time on live TV. Produced and directed almost like a live sports event, “Earth Live!’ will be the ultimate live broadcast from the natural world,” Monroe said.

“Origins,” an ambitious attempt to tell the story of mankind and the discoveries and innovations that propelled mankind forward. Each episode story starts “in the present day and finishing … at the beginning, the origin of the story,” Nat Geo said.

“Deep Freeze,” a six-hour reality series featuring scientists based in the harshest environment on Earth, in Antarctica. Nat Geo says the show represents the most access ever granted a camera crew in the remote region.

“Lawless Oceans,” a series in which a maritime investigator, Karsten von Hoesslin, pursues criminals and wrongdoers on the high seas. It reveals how the world’s most remote waters are beyond the reach of the laws of nations.

“Chain of Command,” another “unprecedented” documentary series in which camera crews will have access to military decision-making at the Pentagon. They will also be embedded with the troops on the front lines in Afghanistan, tasked with carrying out the commands and strategies devised by the Pentagon planners.

Also announced: David Letterman -- in his first job in TV since leaving his CBS “Late Show” last May -- will be one of the celebrity “correspondents” in the returning Nat Geo series “Years of Living Dangerously,” which examines various environmental issues around the globe. Nat Geo released a photo of Letterman (above) with full beard that was taken just last week in India, where Letterman was shooting his portion of the “Living Dangerously” series.

Nat Geo also announced it is reworking its longest-running programming franchise, “Explorer.” It will relaunch next fall as a one-hour, weekly magazine-talk hybrid, with each episode taking on several stories and also featuring in-studio guests talking about the stories before a studio audience.

“This is not ‘Charlie Rose,’ this is not ’60 Minutes’,” Monroe said. “It will be provocative, unexpected and entertainment first.”

cable tv, news, tv, upfront
1 comment about "Nat Geo Leaps Into Upfront Season With Programming On A Global Scale".
Check to receive email when comments are posted.
Next story loading