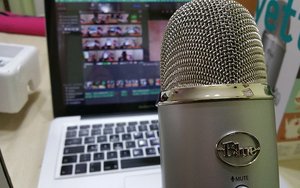 One of the best and most entertaining ways to stay abreast of political developments and opinions across the spectrum is listening to podcasts.

A variety of political podcasts covering the 2016 election range from conservative to liberal. All use conversational and interview structures.

Below is a list of three political podcasts that will keep you up to date with the presidential election and provide insights from Washington elites and political journalism’s best.

The "Political Gabfest" is a comfortable place to start with political podcasting. Leaning mostly Democratic and hosted by David Plotz of Atlas Obscura, Emily Bazelon and John Dickerson of CBS’ “Face the Nation,” listeners are presented with a range of opinions, where disagreements on the role of the Federal government are not uncommon.

With episode titles like “The ‘Rough Them Up’ Edition” and “The ‘I Have a Gun and Her Name is America’ Edition,” listeners are afforded additional insights from John Dickerson, who has had numerous personal interactions with the leading presidential candidates. Emily Bazelon, a senior research fellow at Yale Law School, is the legal expert. David Plotz serves as the well-educated layman.

For a full breadth of political inclinations, "Left, Right & Center" is a good choice. Each episode has pundits from the left, right and center of the political spectrum. Moderated by Josh Barro of Business Insider, formerly of The New York Times, with regulars including influential progressive journalist Robert Scheer and National Review editor Rich Lowry, this podcast will scratch your political debate itch.

Barro serves as a moderate voice amid often strong pro-Sanders positions from Scheer and what you might call “establishment” GOP stances espoused by Lowry. The conversations are always civil, with the occasional rant from one side or the other. "Left, Right & Center" helps frame the various positions on issues central to policy debates in the 2016 election.

As the name suggests, "The Pollsters" focuses on the most recent and interesting polls of the 2016 cycle. The bipartisan team of Democrat Margie Omero and Republican Kristen Soltis Anderson, both political pollsters by trade, discuss weekly developments in polling.

A major tenet of the podcast is the continued trust in polls, but with the understanding that samples matter and that not all polls are equal. For a professional take on what polling means for the 2016 election, "The Pollsters" is the place to be. Episodes are often accompanied by interviews with fascinating guests, ranging from Frank Newport of Gallup and John Aristotle Phillips of Predictit, listeners develop a deep understanding of polling and its importance in most, if not all, political strategy.