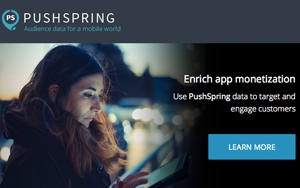 After integrating with MediaMath’s Terminal One (T1) platform a week ago, PushSpring is already seeing demand for its data from MediaMath customers and PushSpring Audience Console customers, said Tyler Davidson, co-founder and CRO, PushSpring.

MediaMath is PushSpring’s twentieth data destination partner. Others include DSPs such as The Trade Desk, InMobi and Google’s DoubleClick; DMPs like Oracle Data Cloud, Nielsen's eXelate and Lotame; and data onboarding with LiveRamp and Acxiom.

After the February launch of PushSpring's Audience Console, the company is tweaking the product and added a lookalike modeling feature last week, Davidson said. Primarily large-scale agencies and brands (in verticals including OTT video, insurance and financial services, retail, CPG and travel) are using the product.

And where does PushSpring stand amid the rapid growth in mobile?

Davidson said the report confirmed mobile and mobile programmatic demand is getting stronger every day as consumers spend more time on mobile devices and advertisers try to reach them. A number of players are getting into the mobile market, Davidson said, and PushSpring feels pretty good about where it's sitting.