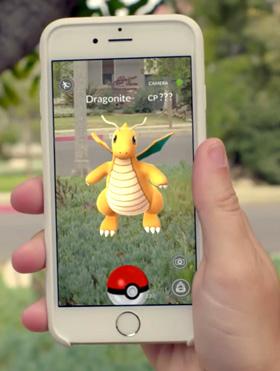 Google spun off Niantic Labs, which gained its fame through the mobile game Ingress, in August 2015. Now along with The Pokémon Company and Nintendo, the companies aim to monetize the game through location-based ads.

The sponsored locations would give physical locations the ability to create "Lure Modules," which attracts players to find a character at a specific location.  Niantic CEO John Hanke told The Financial Times that companies will pay to become locations within the virtual game board to spur foot traffic in physical stores, but he didn't say whether Google provides the mapping software and ad technology to make that happen.

The app asks for an email address when signing in for the first time, so cross-media ad targeting in email based on location will likely become an option.

Some 80% of the mobile gaming industry's $39 billion in global revenue now comes from in-game advertising, according to Bloomberg.

Pokémon Go players traverse the physical world with help from a digital map looking for the animated characters that appear on a mobile phone screen. The game fuses augmented reality (AR) with the physical world. The idea is to overlay images in a person's view on the digital screen.

Any business can become a Pokémon Go destination. Queens, New York, L'inizio's Pizza Bar spent about $10 on Lure Modules and saw food and drink sales spike by more than 30% this past weekend, per Bloomberg.

Niantic Labs released the beta version of Pokeman Go in late May. Taykey, which analyzes hundreds of millions of data points daily to identify trends, said it saw a massive shift in June and July in the demographic profile of people talking about the Pokemon franchise.

Prior to the game launch, the audience was 80% male, but since the audience split almost evenly between males and females.