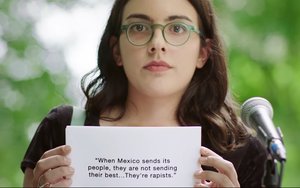 A new survey shows there were more than seven times as many negative TV commercials against Donald Trump than against Hillary Clinton in a recent seven-month primary season period.

MapLight, a political research group, in analyzing data from Political TV Ad Archive, has found that Trump, the Republican presidential nominee, was the subject of at least 4,963 minutes of negative advertisements between Nov. 20 and July 14, in 23 TV markets totaling 83 hours of air time.

In comparison, there were around 11 hours of negative ads aimed exclusively at Clinton, the Democratic presidential nominee, during that time period.

Around 30% of that air time was devoted to one ad that attacked the Republican nominee's history of using undocumented workers on construction projects.

Of the 95 individual TV commercials focused on Trump, the Political Ad Archive determined 71 were “unambiguously negative,” while 22 ads were considered strictly positive. The survey said anti-Trump ads aired at least 7,811 times during the primary season.

Looking just at one Democratic-leaning super PAC, Priorities USA Action, it shows 527 attack ads on Trump, including one spot that has run 415 times. “Hillary for America”, the Clinton campaign, has backed more than 130 anti-Trump ads.