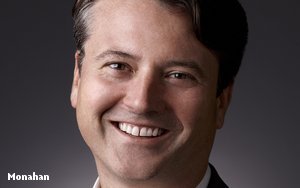 Pinterest is bringing on Brian Monahan as its new head of Vertical Solutions, the social network is expected to announce on Wednesday.

The industry veteran most recently served as head of marketing at Walmart.com. In strategic verticals, Monahan will be expected to develop marketing programs to increase brand awareness, user adoption, and revenue.

Although he obviously sees room for improvement, Monahan said he already sees Pinterest as a great platform for brands to reach audiences. “Pinterest has the scale, the commercial intent, and the sophisticated ad products to help partners grow,” he said.

Monahan will report to Cat Lee, head of partner marketing.

During his career, Monahan has held various executive roles inside IPG, including running digital for the global Microsoft account, launching IPG's programmatic trading desk, managing the IPG Media Lab, and leading its media-buying unit Magna Global. Monahan is also the co-founder of NewCo, a media and events company for business innovators.

While no Facebook, Pinterest is holding its own in the social media and commerce space. The pin-based platform has grown to more than 150 million users -- up from around 100 million about a year ago -- it recently announced.

Upon the news, Ben Silbermann, co-founder and CEO at Pinterest, said he was most excited about the diversity of the platform’s community. Over half of people on Pinterest, and 75% of new signups, are from outside the United States, he said.

Moreover, 40% of consumers joining Pinterest are men, which represents a 70% increase year-over-year.

The new growth figures came amid speculation that Pinterest is setting the stage for a forthcoming IPO. Fueling that perception, Pinterest recently brought on Todd Morgenfeld -- formerly VP of finance at Twitter -- as its first chief financial officer.