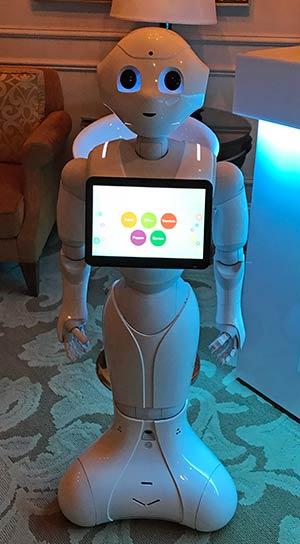 There was no shortage of robots at CES this year.

Some are very short and can roam about the house, acting as a hub with connections to various smart appliances and objects.

Many I saw throughout CES are more ideas and concepts rather than actual buyable units in the U.S.

Some promise to be ready for next holiday season, a year away, while others are promoted as voice-activated personal assistants, Amazon Echo-like. They have names like Buddy, Heasy, Tapia and Moorebot.

Away from all the noise of the main hallways of CES stood Pepper, the biggest robot of them all.

Not necessarily by size, standing at a mere four feet tall, but by most any other measure.

Pepper is the big deal for robots focused on customer engagement.

The robot is from Softbank Robotics, one of the most major of players in the world of the Internet of Things.

The Japanese powerhouse bought ARM Holdings for $32 billion, giving it a major stake in chip designs for all things IoT heading into consumers’ homes. It also has invested in Boston-based Swirl, a company using location technology for ad delivery via beacons at retail, and wearables market-leader Fitbit.

And then there’s Pepper.

Launched in prototype form in 2014, the humanoid robot is only new to the U.S., having already been placed into more than 125 Softbank mobile stores in Japan, where customers are greeted and welcomed by the robots, which also have been accepted into Japanese homes.

Softbank last year teamed with the agency Midnight Oil, which has been working on the brand strategy and positioning, as I wrote about here at the time (Pepper The Robot Hires An Agency, Launching In The U.S.).

Rather than seeing Pepper at a big-production display on the noisy halls of CES, I met privately with Pepper and the Softbank team in their private hotel suite.

Instead of being used to connect and control objects around the house, which it likely could easily do, Pepper is designed primarily for businesses.

Pepper could greet customers in a store, provide car shoppers with information at an auto dealership or help check travelers into a hotel, as but a few examples. Its omni-direction wheels allow it to move as it interacts with people.

“Pepper is meant to engage,” said Steve Carlin, GM and vice president of business development for the Americas at Softbank Robotics.

Pepper is a friendly robot. It also has some polished features, including eyes that light blue when interacting and even textured fingertips at the end of its frequently gesturing arms.

It will ask if you want to dance with it, and if not, will gladly play some music and dance by itself. It answers questions and learns as it goes.

Once you engage with Pepper, it remains focused on you, even if within a group, and watches and listens for only your words.

Unlike most humans, Pepper has a memory so good that it can match the right message to the right person, based on characteristics, such as height, gender or facial expressions.

Pepper has a 3D camera, which allows it to detect people, read their emotions and react accordingly. It has voice recognition and also sports an Android tablet that can be used for input or to display messages.

When conversing with Pepper, the robot could tell if I was smiling or not and reacted accordingly.

While Pepper may initially strike consumers who first meet it as a novelty, the easy back-and-forth conversations with it can quickly become useful insights for those consumers.

Thousands of Peppers are not likely to show up at any mass market locations in the U.S. anytime soon, since the Softbank approach is to introduce the humanoid robot gradually and advance its programming based on market interactions.

“We want to learn our way into this market,” said Carlin.

During that time, Pepper will be learning as well.