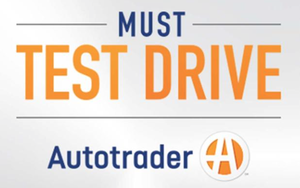 While much of the car-shopping process can be accomplished online, nothing beats the importance of a test drive before making a final purchase decision.

Since there are more than 300 new-vehicle nameplates available in 2017, how are shoppers to know which new or redesigned models are worth their precious time and attention as they decide what car to buy next?  With that in mind, the expert editors at Autotrader announce the winners of the

With that in mind, the expert editors at Autotrader announce the winners of the 2017 Must Test Drive Awards, featuring the best new cars that are worth taking for a spin before shoppers make their final purchase decision.

Now in its third year, the awards are a uniquely consumer-focused program designed to highlight 12 vehicles that car shoppers should check out. Autotrader’s editorial experts, who log thousands of miles test driving the latest cars, trucks and SUVs on the road each year, choose the winners based on a diverse set of criteria, and the winners represent a variety of segments and styles to appeal to the various needs of each shopper.

To be considered for a Must Test Drive Award, a vehicle must be of the current or next model-year and available to purchase at the time of the awards announcement, featuring a base price under $75,000, offering a significant value for the asking price and scoring no lower than a 3.5 on Autotrader’s five-point scale.

Many automakers have used the Must Test Drive designation in varying forms — some use it as the basis for a press release of their own, some have put it on their consumer-facing web sites and some have used it at public auto shows, said Brian Moody, executive editor at Autotrader.

“The Must Test Drive Awards are designed to help shoppers narrow the field of cars they’re considering,” Moody says. “Some vehicles are well-known to the average consumer because of advertising or because they are historically popular. What we’re doing is getting very specific about the one or two cars that shoppers should consider and test drive before making a final decision. That way, even if they decide to buy the car they were originally considering, at least they can do so knowing it truly is the best car for them with no fear of missing out on something better.”

The Lincoln Continental is one surprise winner, Moody says.

“Sometimes, when an automaker resurrects a formerly popular model (like the Continental) they don’t pay attention to the details or seem to lose sight of the spirit of the original,” he says. “Not so with the Continental, the attention to detail is amazing. Lincoln didn’t phone it in, they went the extra mile. The Mazda CX-9 is also surprisingly good — the combination of interior quality and starting price, as well as fuel economy and performance, are much better than we would have guessed before we got behind the wheel.”

Porsche is one automaker not often found on the list.

“We don’t seek to eliminate any one brand but because of our $75,000 base price limit, some very good performance cars don’t make it,” Moody says. “We have that price limit because the editorial team believes most Autotrader visitors are looking for the best value. That being said, the Porsche 718 Cayman is a car that is nearly as good as the company’s own, but more expensive, 911. Several on our staff said they prefer the Cayman over other, pricier sports car. Plus, it looks amazing.”