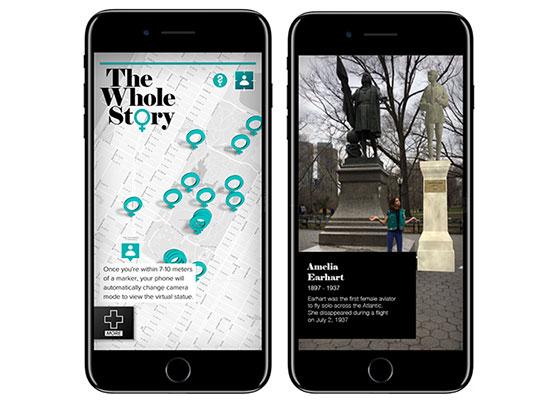 McCann isn't the only agency with a project aimed at lending support to and awareness of women in leadership roles and their contributions to society. This week Y&R New York unveiled The Whole Story Project, a project that will allow for the placement of virtual statues of notable women in history. The aim is to create parity in public representation and share the accomplishments of women.

The effort launches with an augmented reality app because, well, augmented reality is where it's at today. The work is Y&R’s first product that's part of an initiative the agency began a year ago in support of the UN’s Sustainable Development Goal to achieve gender equality and empower all women and girls.

The project’s mobile app and online platform, designed along with Current Studios, makes it possible for people to see, share and add new virtual statues alongside existing public statues. Using augmented reality and GPS location technology, users locate and view statues using markers on a map and can also find details of their
contributions. All of the images can, of course, be shared on Facebook, Twitter and Instagram. So expect to see a lot of statues alongside those top ten band lists.

The agency will work with the National Collaborative for Women’s History Sites (NCWHS), the nonprofit organization that promotes the preservation of locales significant to American women’s history and makes women's contributions visible. The NCWHS is working to develop a National Votes for Women Trail, that will run through every state, to trace and raise awareness of the path to achieve women’s suffrage, leading up to the 100th anniversary of the establishment of the 19th amendment in 2020. Members of NCWHS along with historical advisors at universities, museums and historical sites will participate in The Whole Story Project to add virtual statues of key women that shaped the suffragist movement and all of American history.

Of the project, Y&R North America CCO Leslie Sims said, “It is no surprise that everywhere you turn, in almost every city, most of the statues in public spaces are men, and the few women are usually drawn from fiction. Many groups, including the UN and Girls Scouts, are working hard to redress this gender imbalance but, realistically it’s going to take millions of dollars and many years before we see even a handful of women taking their place in the public landscape. The Whole Story Project offers a way to create immediate awareness and access to the amazing history women have made around the world. We hope that in telling the whole story right now, far and wide, the app will not only be enlightening but also empowering."

The Whole Story Project invites creators and developers worldwide to build and place statues of women in their own cities. The Y&R team will hold an invitational hackathon developed with Code Liberation in New York. Global offices throughout the Y&R network including Sao Paulo, Buenos Aires and Moscow are also placing statues in their cities and some will host hackathon events.

The Whole Story Project is also championing efforts to create physical statues of real women in communities around the world such as the Monumental Women campaign of the Elizabeth Cady Stanton and Susan B.
Anthony Statue Fund in New York City.