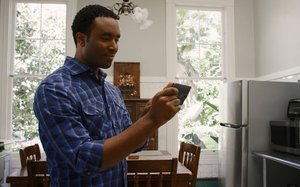 The housing market may be strong, but Lowe’s just announced weaker-than-expected sales and profits. It also says it’s continuing its push into customer-experience innovations, including a new AR app and a robotic exosuit.

While the numbers disappointed Wall Street observers, there’s no arguing that the results were solid, especially with so many retailers gasping for air. Sales for the first quarter jumped 10.7% to $16.9 billion, up from $15.2 billion in the first quarter of 2016, with comparable-sales results inching up 1.9%. But analysts had been expecting over $17 billion. And net earnings fell to $602 million, from $884 million, also below industry predictions.

The Mooresville, N.C.-based retailer says the healthy economy and its project expertise led to better-than-average sales in indoor projects, and that sales to professionals also did well. But results in lawn and garden, paint and seasonal and outdoor living weakened.

In a presentation for investors, the company stood by its full-year forecast, which calls for sales gains of 5%, with same-store sales rising 3.5%, citing job gains, income growth and strong consumer balance sheets, as well as indications that people have an increasingly upbeat view of their own finances.

“Rising home prices should continue to encourage homeowners to engage in more discretionary projects in addition to ongoing maintenance and repair spending,” it says.

The company also says its strategic priorities include advancing customer experiences through its omnichannel offerings. Earlier this spring, for example, it released the Lowe's Vision app, a 3D tool powered by Tango. Lowe’s, which has been working with both AR and VR in its innovation lab for the past two years, says it blends “area learning, depth sensing and motion tracking to give devices the ability to see their environment in 3D.” Consumers can use the new technology with Lenovo’s Phab 2 Pro, the first Tango-enabled smartphone. The app allows people to measure any room with the touch of a finger, using AR to style it in real time.

It’s also developing tech initiatives to help employees as well as customers. Last week it announced an exosuit for workers, “a wearable robotic suit with lift-assist technology” currently testing in its Christiansburg, Va., store. Developed in partnership with Virginia Tech, it’s part of the company’s narrative-driven approach to innovation, working with science-fiction writers to envision the future based on story telling. The suit is designed to help with heavy lifting and prevent muscle fatigue.