Why Amazon Is The New Google For Buying

They’re called the “duopoly” of online advertising. Facebook and Google account for 75% of the U.S. digital ad spend — and almost all of its growth, according to the Interactive Advertising Bureau.

But are these behemoths about to be blindsided by a fierce competitor with a better ROI?

A consumer research study for a beverage manufacturer uncovered an interesting trend, one that might tip the scale for advertisers. Consumers who had an Amazon Prime account started their search for a purchase at Amazon 100% of the time. If they knew what they wanted to buy, they went directly to Amazon to search for different brands with the best price and delivery options.

With 85 million Amazon Prime members as of June 2017, it’s not going to take long for consumer brands to discover that if you want to invest ad dollars in finding buyers with high purchase intent and conversion rates, Amazon is going to be hard to ignore, as noted in this chart first published by Statista here. 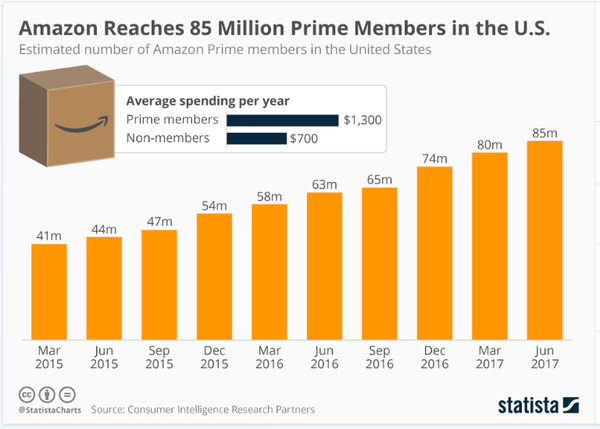 Although its ad business is small in comparison to Google and Facebook, with only 1% of global ads, it actually is one of Amazon’s fastest growing areas, now on track to generate close to $2 billion this year.

With the digital ad market predicted to grow at 16% this year to $83 billion according to eMarketer, the Facebook-Google duopoly will get its fair share, and almost all of the attention, especially considering the growth of Facebook’s Snapchat ad revenue, up 158% in the past year. And that may be just how Amazon likes it. It has a history of sneaking up on competitors. Just ask Microsoft and IBM about Amazon Web Services (AWS).

Andy Jassy, the AWS CEO, said that in some ways the growth of his business was a classic case of disruption dynamics. “The competition simply didn’t believe there was enough of a market to worry about it. The dominant players don’t have any reason to worry about someone attacking the bottom of the market.” AWS now owns a third of the cloud infrastructure services market, more than three times that of its next closest competitors.

Amazon seems to follow Al Pacino’s “never let them see you coming” advice from “The Devil’s Advocate.” But one ad executive — Sir Martin Sorrell, WPP’s CEO — has noticed. In a recent interview with Bloomberg said, Sorrell said, “The company that would worry me if I was a client — or I think worries our clients, more than Google and Facebook — is Amazon.”

Smart ad dollars follow consumer behavior — and, as we just learned, those consumers are headed to Amazon.

advertising, amazon, amazon prime, online
3 comments about "Why Amazon Is The New Google For Buying".
Check to receive email when comments are posted.
Read more comments >
Next story loading