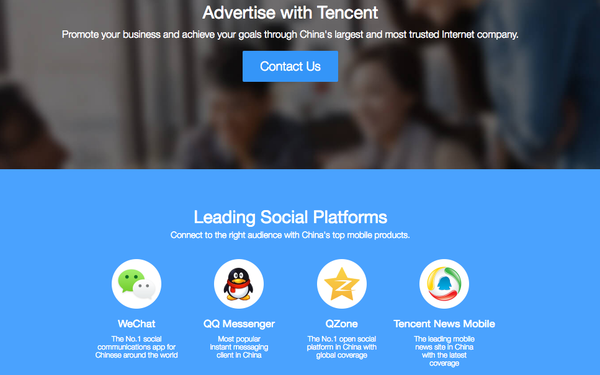 WeChat opened its services to U.S. advertisers Thursday through its parent Tencent, a Chinese holding company.

With 963 million monthly active users on the mobile WeChat app, Tencent announced a new program Thursday aimed at educating and attracting U.S. advertisers and their agency partners to its platforms and apps.

Launch partners include U.S. brands such as Rebecca Minkoff, and Simon Property Group.

“For the first time, we are making it possible for U.S. brands to directly reach this audience through sophisticated targeting, not only in China but also when they travel to the U.S.," stated Poshu Yeung, vice president of international business at Tencent.

The company claims Chinese consumers spend more than 55% of their mobile internet time on Tencent platforms, such as WeChat/Weixin, QQ, Qzone, Tencent Video, and Tencent News.

Although they may spend, few retailers are familiar with the variety of ad programs Tencent offers. In January 2017, Tencent launched "mini programs," similar to the Apple's app store, to build on the WeChat app. There is no app store. These lightweight apps live within WeChat and enable its users to perform a number of actions without ever leaving the platform.

eMarketer reports there were more than 2,000 mini programs available at the launch. The initial reaction to them has been mostly "lukewarm," but some retailers have been warming up to the idea after discovering that the apps send foot traffic to stores and potentially drive sales.

Users of the mini programs can discover content based on location and personal data, such as user age. Retailers bid for ad space, so when a user clicks on the “Mini Programs Nearby” button their mini program serves up in search results.

Tencent plans to build out U.S. dedicated teams to support the launch.