How Dara Khosrowshahi Is Transforming Uber 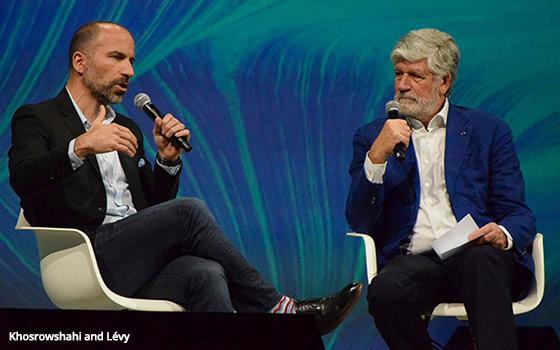 A few months ago Dara Khosrowshahi replaced Travis Kalanick as Uber CEO. In a chat with Publicis Groupe supervisory board chairman Maurice Lévy during VivaTech today Khosrowshahi said he is striving to grow the company “responsibly.” His mission, above all, he said is to achieve growth “in a way that benefits all constituents.”

For one, Uber is reinvigorating its talent and culture after last year's widely-reported turmoil. He also isn't going it alone, and is hiring a new management team to help him run the company.

Uber crowdsourced the ride-sharing platform's new set of values from its workforce, Khosrowshahi said, taking those ideas to help reframe the company culture going forward. In a nutshell, he added, "We do the right thing period."

In addition to its own team members, there are three million driver partners that are benefiting from Uber's newfound sense of “doing the right thing.”

Uber's new guiding principle of profits with purpose is something Khosrowshahi said he brought from his previous Expedia role. "Growth but responsible growth," he says, adding this is why Uber is bringing insurance benefits to its operations across Europe. He also promises that one day Uber will be profitable.

Uber has changed its governance to ensure the board becomes "united again" and "not thinking about who is in control," he says. Uber's corporate strategy also is no longer just about cars but "however you get around in a city" including electric bikes and "hopefully, one day, flying cars."

There are three pieces of advice Khosrowshahi likes to give new college graduates, he told Levy. First, he tells them to look to work with people they like and can learn from. Second, he recommends people go to a company where they can individually make a difference.

Suggestion number three: Think larger by going to a place where people can make a difference in the world. In other words, everything Uber was not about five months ago.