Sorrell, Auletta Duke It Out In Cannes 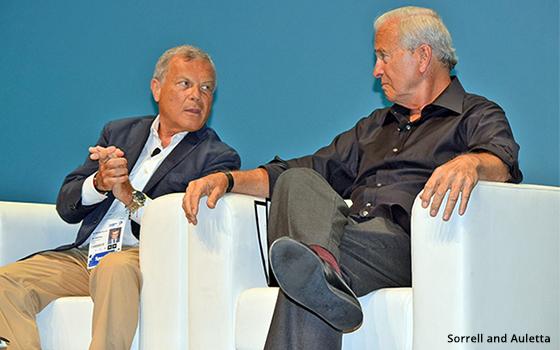 Former WPP chief Martin Sorrell appeared to a packed house Friday at the Cannes International Festival of Creativity with author Ken Auletta in a highly anticipated session that turned out to be the most entertaining back-and-forth of the conference.

The conversation quickly turned into a battle, largely over Auletta's recent book "Frenemies," which documents Adland’s struggles and Sorrell's refusal to address his scandal-plagued exit from WPP.

At one point, when Auletta was trying to take control of the conversation, Sorrell replied: "This is a boxing match, and it is going too far in your corner."

Sorrell called Auletta out for the criticism that his coverage skewed only to those who granted him access.

Omnicom's John Wren, for instance, was barely covered after Auletta says he didn't "call him back."

MediaLink's Michael Kassan, by contrast, served as the central character in the book; Auletta sees him as the "central powerbroker" in the industry. Sorrell countered that it was just because Kassan granted him the most access.

Sorrell, for instance, was not comfortable about granting availability to sit in conference room meetings and client phone calls. "Those are difficult things to accept," says Sorrell. "Therefore, the characters you choose for leads were determined by the access you had."

There wasn't anyone from Google, because Auletta previously wrote a book about the platform and wanted to "cover other ground." He wasn't clear over his reasons why Facebook's Carolyn Everson was interviewed over the more famous Sheryl Sandberg, other than Sandberg seemingly didn't want to speak with him.

The book only addressed Amazon by reporting its data.

Sorrell also questioned the book's premise that the first Mediapoolza was triggered by a presentation that former MediaCom CEO Jon Mandel gave at an ANA conference decrying media-buying practices. Sorrell countered that the biggest players, P&G and Coca-Cola, were already in motion.

Auletta, trying to take back the control, kept trying to "address the elephant in the room" about Sorrell's departure. At one point, the audience booed after Sorrell refused to allow Auletta to ask him questions. Auletta said: "You are doing a rope-a-dope with me."

Sorrell continued to refer to his boilerplate answers about how he has strenuously denied each and every allegation. It became tense when Auletta sought to dig into the specific prostitute leak. Sorrell did joke he was "shot, not ousted" as WPP boss.

Sorrell once again pointed out that he doesn't deny he is a tough boss, in light of the recent Financial Times article that spoke with WPP staffers over his abusive verbal behaviors. "I don't know who the FT talked to, but they maybe spoke to the wrong 20 to 25 people. I have numerous emails which would counteract what you just said."

Auletta did offer his book's big missed opportunity by saying he hoped to follow AT&T's entire pitch review process led by MediaLink. He wanted to document how clients made decisions, develop creative campaigns and track results.

However, at some point after being granted access, AT&T CEO Randall Stephenson nixed the plan. He probably asked if it was wise to have a reporter in the room when the firm was fighting the federal government in court over its effort to acquire Time Warner.