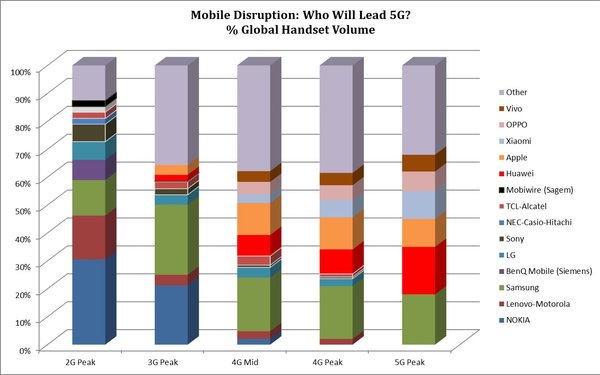 If history repeats itself, the advent of 5G smartphones might be one of the worst things to happen to current market leaders like Apple, Samsung and Huawei.

In the cell-phone business, analysts for Strategic Analytics say, it’s out with the old and in with the new. Major technological leaps--like 4G to 5G--leave the old market leaders struggling to compete.

SA’s new report to clients predicts “It is highly likely that the current top three smartphone vendors globally [Samsung, Huawei, Apple] will see their share decline” as 5G is introduced.

To back that up, the report says, “With each new generation, we have seen major changes in design language and use cases. Generation-led design changes have disrupted the status quo on numerous occasions.”

Remember Nokia? It “peaked in 2G and lost 1/3 of its share in 3G and disappeared in the 4G world,” SA notes ominously. The same with Motorola, creator of the flip phone. That cellphone  brand, the report says, lost 80% of its global market share from the time 2G phones peaked to when 3G phones did.

David Kerr, who wrote the report with input from three other analysts at SA, says “although it is not inevitable, the weight of history does suggest a significant risk for one of the top three to five [brands] to be displaced,” when 5G phones come to market some time in 2019.

He adds, “The history of mobile also shows that second -tier vendors inevitably look to new [mobile] generations to get slotted at major operators in key markets. “

The introduction of 5G  is a time for new, or less established brands, to shine. Market leaders are usually cautious because they don’t want do disrupt their business when it’s on a roll. But Kerr says smaller brands “don’t have huge profit pools to protect.”

He continues,  “Think in a similar vein with the T-Mobile ‘uncarrier’ which has dramatically changed the pricing and value proposition among service providers. Something similar might be expected from ambitious Chinese brands looking to build global scale.”

Every generation produced it own fad or innovation. SA’s Ken Hyers points to Motorola’s flip phone which was a 1G sensation and now is a visual joke to depict a consumer who is way behind the times.

Kerr  says that over the next three to four years, 5G “lacks a killer application or collection of applications” and suggests that the biggest challenge will be marketing.

The new-gen phones “will need significant marketing push from both operators and device vendors.

The biggest advantage Apple and Samsung have is their huge scale of advertising and marketing rather than any sustainable technology leadership.”

The “foldable” or “rollable” phone, that Samsung will market (first in 4G) next year and is “perfectly suited” for the 5G market, says Hyers. The new generation phones will offer more at 5G  gets refined. He envisions a lot of other 5G goodies and mechanics like additional chipsets, antennas, increased memory, longer battery life, better heat dissipation, processors for artificial intelligence applications and better graphic processing units.

“But all of this hardware will make foldable-display devices much more expensive that today’s smartphones,” Hyers says, and he predicts those devices “will be too expensive for the vast majority of people, especially in the first few years) that they are available.” He concludes it’s a tricky time because  “consumers are increasingly reluctant to spend $800-$1000+ for incremental improvements."