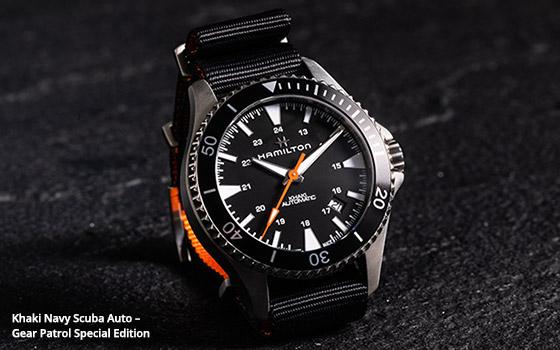 has partnered with watch brand Hamilton to sell a special-edition watch sold exclusively at the site's online store.

“Hamilton has been a longstanding advertising partner of Gear Patrol. As we’ve continued to increase our commerce efforts through new hires and products, Hamilton approached us to see if we would like to sell their products in the Gear Patrol Store,” Zach Mader, partner-vice president, partnerships, Gear Patrol, told Publishers Daily.

It is a 40mm stainless steel automatic timepiece with a domed sapphire crystal and 100m of water resistance. It comes with a stainless steel bracelet and an additional NATO-style strap.

The watch is available at the Gear Patrol Store starting tomorrow, for $745. The first run is limited to 50 watches.

“We sat with the editors of our watch desk and selected a watch from Hamilton’s lineup that, with some minor modifications, would fit seamlessly into the lives of Gear Patrol readers,” Mader said.

The partnership is an example of a brand tapping into Gear Patrol’s readership data and purchasing habits to target a specific market segment of enthusiast consumers, according to the publisher.

“We recognize our unique opportunity to reach enthusiast audiences,” stated Eric Yang, CEO of Gear Patrol. He added the product launch is “just the beginning.”

The publisher also sells a few other products exclusively on its ecommerce platform, such as a pair of Gear Patrol gloves created by Mountain Standard and the Gear Patrol x Askov Finlayson wool knit hat.