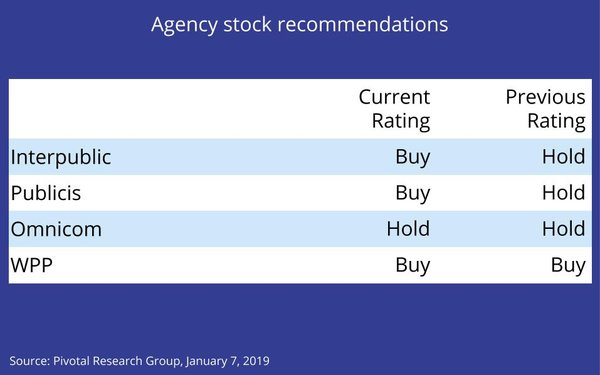 While Wieser, an analyst with Pivotal Research Group, kept ratings unchanged for Omnicom (hold) and WPP (buy), he raised his price targets for both company’s shares in 2019.

In the same note sent to investors Monday morning, Wieser upgraded price target for shares of Nielsen’s stock, but kept its rating as a “hold.”

“Agency holding companies and Nielsen face a wide range of common concerns at the present time, largely driven by the disruptions their core customers are facing,” Wieser writes, adding: "However, pessimism is either fully or more-than priced in at current trading levels we believe. Further, if an economic downturn were to arrive in the near-future, this group of companies would be among the best positioned within our coverage universe. For all the cutting in spending that has occurred by core clients such as those in the FMCG sector over the past couple of years, further meaningful cuts would likely leave those clients substantially less able to compete, leading us to conclude that such reductions in spending would be relatively unlikely. At the same time, because of the negative operating environment each of them has faced over the past few years, companies in this group have generally invested in repositioning their businesses for evolving customer needs. This is especially true with new offerings related to e-commerce as well as data-related and marketing technology services, which should appeal to clients prioritizing such efforts to drive their marketing activities in the near future.”