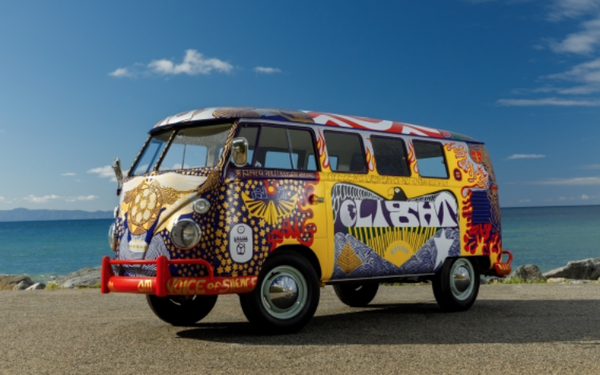 After more than 50 years, the iconic "Light" bus—a Volkswagen Type 2 van made famous after its appearance at the legendary 1969 Woodstock Art and Music Fair—will ride again.

The culmination of a three-year quest to recreate, restore and repaint a lost symbol of the Summer of Love culminated Feb. 16 with the unveiling of the bus, made possible with help from Volkswagen of America and the greater Volkswagen community.

The Light bus will embark on a cross-country tour leading up to the music festival’s 50th anniversary. Scheduling details are still being worked out, according to a VW spokesperson. Appearances will be largely spring and summer at VW enthusiast and possibly some additional music events.

The van is the result of a three-year endeavor with Hieronimus and Canadian documentarian John Wesley Chisholm to recover and recreate the van ahead of Woodstock’s milestone anniversary.

After learning about the project, Volkswagen of America supported the search and restoration process. A team of Volkswagen fans also helped bring the project to fruition.

Hieronimus had painted the original 1963 Standard Microbus in 1968, after an invitation from the van’s owner, who was using it to haul his band to the festival and wanted a “magic bus.” It became a symbol of the Woodstock festival's generational call for peace, love and unity after a snapshot of the van by The Associated Press was widely circulated in newspapers and magazines across the country.

Originally, the pair hoped to locate and restore the original bus, but after a six-month search came up empty, they decided to build a replica. Thanks to a successful Kickstarter effort, the pair was able to acquire an exact model of the original “Light” bus and begin a painstaking restoration process, including a six-week effort by Hieronimus and a team of five artists to recreate the original paintings from the bus.