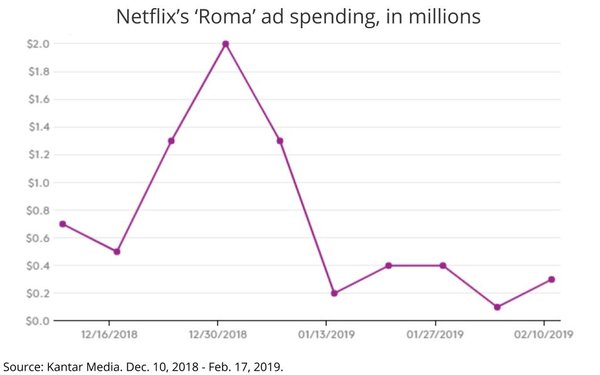 To back its heavily favored Oscar “Best Picture” nomination, Netflix has spent an impressive $7.3 million on paid media advertising since early December, according to estimates released today by WPP’s Kantar Media.

The vast majority -- 65% -- has gone into print, representing a $4.7 million windfall for just two newspapers in the ad schedule: The New York Times and the Los Angeles Times.

“The timing of Netflix’s investment was also quite shrewd, with $1.9 million spent during the week of December 31, while $1.3 million was spent on the weeks of December 24 and January 7,” the Kantar report notes. “Not coincidentally, Oscar nomination voting occurs from January 7-January 14.

“Advertising spend then fell significantly, with lobbying efforts now likely focused more on more direct efforts such as mailings, gifts and parties. However, ads that did run were updated to include the new accolades "Roma" had racked up during award season, with an ad that debuted on February 15 referencing the Baftas the movie won during the past weekend.”