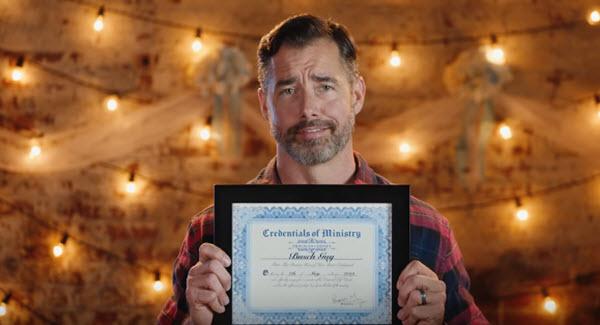 Busch says it noted that some of its most loyal fans include the brand in their wedding celebrations in various ways, including photo tagging, bouquets, and asking the brand to help sponsor their nuptials.

Now, the brand is running a contest in which the winning couple will be married by the “Busch Guy,” who’s had himself legally ordained to do the honors.

As if that weren’t thrilling enough, Busch is sweetening the deal by throwing in a wedding gift of $25,000 (the average cost of a U.S. wedding), and a “full supply” of the beer for the big event.

The contest is being promoted with a video (below) that includes real wedding photos in which cans of Busch figure prominently.

“We know that Busch is beloved by our fans, but being featured in wedding photos and invited to the weddings themselves is an entirely other level,” says Daniel Blake, senior marketing director, Anheuser-Busch.

U.S. residents 21 and older who are planning to wed between July 1 and Aug. 31 can enter, through May 31, by posting on Facebook, Twitter or Instagram (using #BuschWeddings and #Contest) about why they want to get married by the Busch Guy.

Fans can also enter through a dedicated Pinterest contest page, where Busch will be pinning wedding-themed photos over the summer.