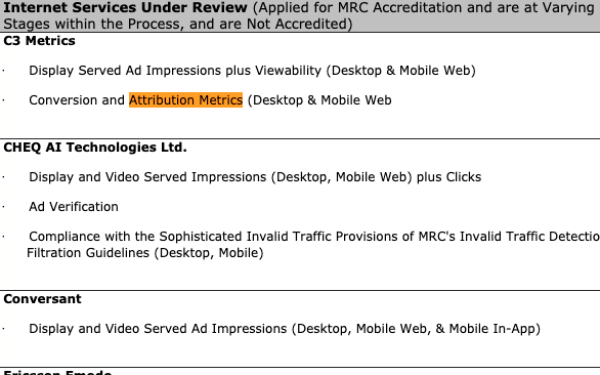 For those of you still trying to get your arms around attribution modeling, you can forget about it. At least, that is, the current versions representing a litany of black boxes all claiming to provide the elusive Holy Grail for understanding your return on media investments. That’s because we are entering a second generation that will provide standards, accountability and a common language for the inputs and outputs of industry-sanctioned models in what might well be called, “attribution 2.0.”

In fact, that’s exactly what Jeff Greenfield will dub it during his keynote Thursday at “Attribution Accelerator,” the fourth year of an annual forum exploring and discussing the broad swath of attribution modeling firms that have emerged in recent years.

“This is a landmark week for attribution,” Greenfield told me during a preview late last week. “The biggest problem with the past -- attribution 1.0 -- is that anyone was able to put their stamp on it and as a result, advertisers kind of lost faith, because there were so many different ways and there were no standards.”

According to Greenfield, most big marketers at least “dipped their toes into” attribution modeling, and many were either left mystified by the results, or just didn’t feel it was worth the squeeze and have chosen instead to focus their accountability measures elsewhere.

While that was enough to get the cottage industry going -- and growing with dozens of established providers crowding the space -- according to Greenfield, we ain’t seen nothing yet.

That’s because the industry is just now putting standards in place that will make attribution modeling far more transparent and explicit. And while you still won’t necessarily be able to peek under the hoods of proprietary systems, an accountable third-party will be doing that for you, industry ratings watchdog, the Media Rating Council.

The MRC, which recently finalized digital audience measurement standards, has already embarked on a process that will create similar standards for so-called “outcome” measurements, including attribution models.

And not so coincidentally, the council has also begun the process of reviewing, auditing and potentially accrediting its first attribution modeling service, which also happens to be C3’s.

Greenfield says the MRC actually invited C3 to be its benchmark for auditing attribution modelers, in a move that is similar to what it did when it began developing standards for auditing so-called “viewability” measurement services.

The idea is for C3 to open its kimono so that the MRC can help define and develop standards that can be applied to others.

However it manifests, Greenfield says it is the beginning of 2.0, because it ultimately will result in a standardized way of auditing and accrediting firms that utilize a variety of different processes that all use the same squishy term “attribution.”

The move will likely instill new confidence among big marketers in the burgeoning science of attribution modeling, and according to Greenfield, will actually set off a new gold rush for companies that have capabilities, but likely have been sitting on the sidelines waiting for industry standards to emerge. He says it also will likely get the attention of private equity companies who want to fund them.

So buckle your seat belts as the advertising industry braces for attribution 2.0.